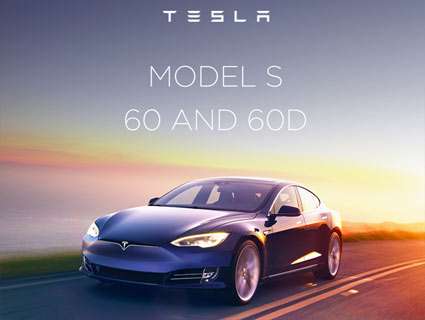 Tesla will be discontinuing the S 60 and 60D on April 17 2017 after the announcement was made via email to Model S customers.
Advertisement

The Tesla model S 60 and 60D option with its 60 kWh battery pack will be available until the middle of April, after which the base model S will be the 75 kWh battery pack. Ironically, the 60kWh model had a 75 kWh battery pack which could only be unlocked via a software upgrade, which many people opted for. Feed back up to now has been that Tesla wants to streamline their ordering process and thus cut the 60kWh model. The range of the S 60 was around 208 - 218 miles depending on the motor and driving conditions, with a 0-60mph time of 5.5 seconds.

From the email sent out to Model S customers, 'One year ago, we introduced the Model S 60 kWh battery as a more affordable option to accelerate the adoption of electric vehicles. However, most customers ended up buying an equivalent to the Model S 75 kWh. To simplify the ordering process for our customers, we will be removing the 60 kWh option from our lineup.'
'Customers who still want the opportunity to own a 60 kWh Model S will have until April 16, 2017 to place their order. Any 60 kWh Model S will have the ability to upgrade their battery to 75 kWh via an over the air update.'

As the upcoming model 3 is expected to be begin production in July and start with a base price of $35,000 before federal tax credit incentives, its a presumption that Tesla want to create a distinct variation between the current model S and the upcoming model 3. This probably points to the model 3 offering a 75 kWh battery pack and with the $68,000 base model S out of the way, means that a fully optioned model 3 has much room to maneuver as an entry-level model.

The model X 60D was to have a software limit last July, but this was discontinued before it saw the light of day.

It's probable that Tesla thought many people would not wait for a model 3 as the 60kWh model was still around, especially if it could be upgraded to 75 kWh, but with such a ramp up of anticipation for the model 3, the model S has to be its own distinct line moving forward.

It will also be interesting to see what the final model 3 battery options will be so the vehicle doesn't tread on the toes of the rest of the Tesla line-up. It was only a year ago that the Model S 85 kWh battery option was discontinued with other battery lineup tweaks along the way, so it won't be a surprise if battery offerings for both the model S and the model 3 will be shuffled around before the model 3 is finally launched.