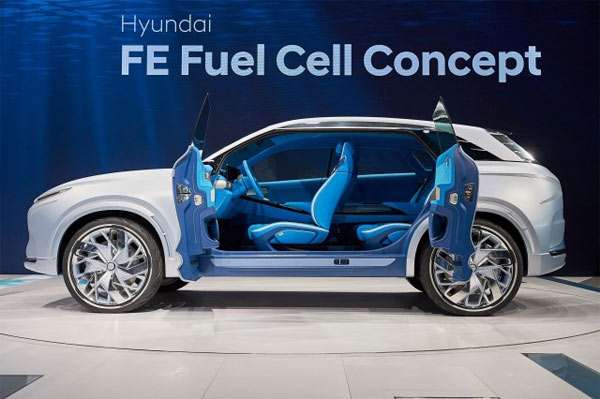 Hyundai has debuted their latest FE Fuel Cell Concept vehicle which should reach production by 2018.
Advertisement

This week's Geneva Auto Show saw Hyundai unveiled their FE Fuel Concept vehicle with a futuristic design and most importantly the next steps for their hydrogen vehicles. The Hyundai Tucson was the first hydrogen fuel cell vehicle offered by the company, with competitors like Toyota coming back with the 2016 Mirai, so it's about time the Korean automaker brought another hydrogen powered vehicle to the market.

The future Eco or FE will use a fourth-generation fuel cell which will be 20% lighter and 10% more efficient than what is already in their ix35 Fuel Cell. With a higher power density than before, will mean a range of nearly 500 miles along with a futuristic cabin and exterior. Range is usually on top of the list for most eco vehicle buyers and with the current competitors including the Mirai doing 312 miles and the Clarity Fuel Cell producing 365 miles, the FE on range alone should win some followers.

As the vehicle is still at the concept stage and being shown off at an auto show, a lot of the glitz and glamour of the vehicle may not make it to the final production vehicle, but that doesn't mean that this concept doesn't stand out. There is an integrated charging space in the trunk, portable battery packs for charging other electrical appliances and the lavish blue, futuristic interior is said to be inspired by nature and water, mainly due to the only emissions or byproducts being water from the vehicle.

The exterior definitely shines in the futuristic department with a smoothed over body, regular and suicide doors for improved access and extremely cool looking integrated lights both front and back. The interior sports a widescreen display, with the center console and touchpad giving that Star Trek type vibe, but with a completely blue makeover.

There is little news at the moment from the company about any type of widespread hydrogen refuelling system both home and abroad, so it is likely that the first vehicles will be on offer in North America, particularly California. There are plans for more hydrogen refuelling stations by 2020, with journeys from Los Angeles to San Francisco currently very attainable.

Hydrogen technology seems a worthy solution to the future of roadgoing vehicles and hopefully when the FE is finally ready to ship, it will at least give the public an alternative. Hybrids and all electric vehicles have a seemingly massive head start, but don't count out hydrogen vehicles as being a nice concept. The Ev market is still up for grabs.