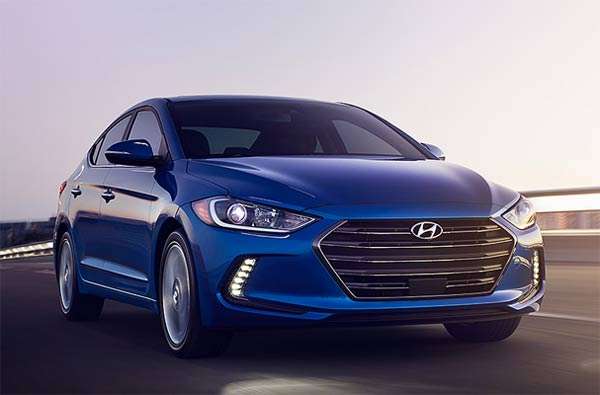 Hyundai have big plans for expanding their range in 2017, with the Elantra possibly coming in as one of the contenders for car of the year.
Advertisement

Hyundai are clearly going to expand their range in 2017 and 2018, with quite a few of their line having been spotted in camouflage gise recently, showing many of their models having updates in the coming year or two. Additional to these redesigns, new models and expansion, AutoGuide.com shortlisted the 2017 Hyundai Elantra for their Car of the Year awards for 2017. Ultimately, the Honda Civic won out in the end, but the Elantra could be seen as the best all-rounder in the final list. When your up against the likes of the BMW M2, Volkswagen Golf Alltrack, Kia Optima, Ford Focus RS and Chevrolet Cruze, being the best all-rounder and focusing more on an impressive list of features is sometimes the real world best option.

One of the main aspects that wins over drivers when it comes to the Elantra is the Korean automakers ability to give a vast array of features at a very affordable price. The redesigned 2017 Elantra has top safety ratings and is loaded with safety features such as lane-keep assist, adaptive cruise control, pedestrian detection and blind spot monitoring, which all add up to a very comprehensive package. The interior may not be as high-end as some of its competitors, but you still get a lot here for the price, and it doesn't come across as cheap, but rather quite appealing for its price point.

Under the hood, you get a 2 L four-cylinder engine putting out 147Hp and 132 lb-ft of torque through a 6-speed auto or 6-speed manual transmission for the Limited model, giving EPA Fuel Economy ratings of 29mpg city, 38mpg highway and 33mpg combined. The Sport model maybe more appealing with a 1.6 L turbocharged in-line engine which has 201hp and 195lb. ft. of torque, but the other models in the range are great for your everyday commute. Other options come in the form of the SE, Value Edition and Eco. The Value Edition packing a lot of extras for the money.

Designwise the Elantra maybe not as overt as its competitors, but it's more subdued styling is one of its benefits. The Elantra isn't a wild design and that's what many people seem to opt. for in the real world. The design isn't conservative but follows the mainstay of modern vehicle design aspects and if you want to have mass appeal, it's the design that appeals most that wins out in the end.

Although the Elantra's closest rivals may sport a classier design, its the Elantra's ability to offer loads of features, with a great range of models and at an affordable price point which will win out in the end. The sports model makes the range more exciting and with something for everybody features, this is why the Elantra could be the car of the year and the best all-rounder for 2017.
Comment below with your opinions on the Elantra.