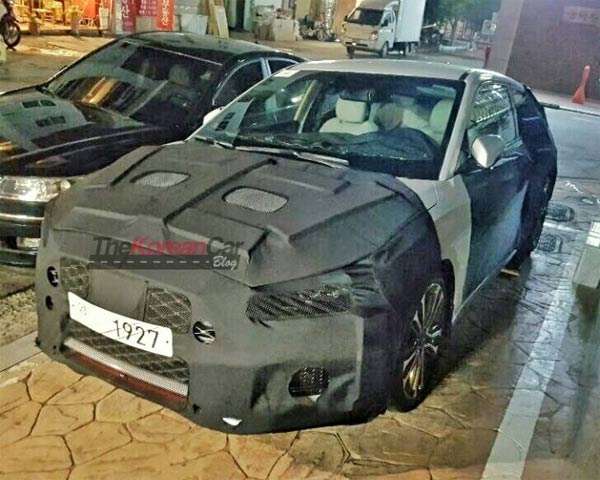 The 2018 Hyundai Veloster has been spotted on the streets showing us brief glimpses of its next incarnation.
Advertisement

Hyundai's Veloster range has been around for some time and an update has been on the cards for some time. Recent spy shots have shown a possible 2018 version in the wild with the same basic look as the existing Veloster range and the same quirky three door layout, but some subtle design changes. Major differences seem to point out more sharp and streamlined taillights which may go along the lines of the i30 hatch. There also seems to be a six-point grille configuration which also echoes the i30's grille design, but heavy camouflaging seems to obscure many of the details.

Other standout feature seem to be the compact rear view with LED tail lights, along with central exhaust tips and alloy wheels, which may cover the whole range. Fender flares and the same body creases seem to carry over.

Although the spy shots give little away about the interior, one of the main caveats of the Veloster range is its head and foot room which could possibly be addressed in the 2018 model, where a more upgraded, premium interior should be expected with a higher spec multimedia infotainment system which will link into Hyundai's present blue link system along with Android and Apple Car Play functionality.

Although the Veloster line now has the turbo models, the basic spec. version may gain an enhanced 1.6 liter turbocharged four-cylinder or a 2.0L GDI (Gas Direct Inject) engine version attached to a seven speed automatic or six speed manual transmission. Dynamics are also an area to be addressed and with Veloster now being classed as a sports car, handling and steering feedback should be vastly improved. Hyundai’s N performance should also provide a 2 liter turbo with around 250 HP and a controlled limited-slip differential, aero suit, improve independent suspension and upgraded brakes. The high-performance sports versions may arrive by 2019. With 30,000 units being sold in the US and with no direct competition, it's possible that the upgraded design will go on sale at the beginning of 2018.

Although Hyundai have yet to officially confirm an upgraded version of the Veloster, all the evidence so far points to a possible first public encounter at possibly the Geneva motor show in March, or as late as December at the Los Angeles motor show. It's still early days, but the new and improved Veloster should see the light of day before the end of the year.