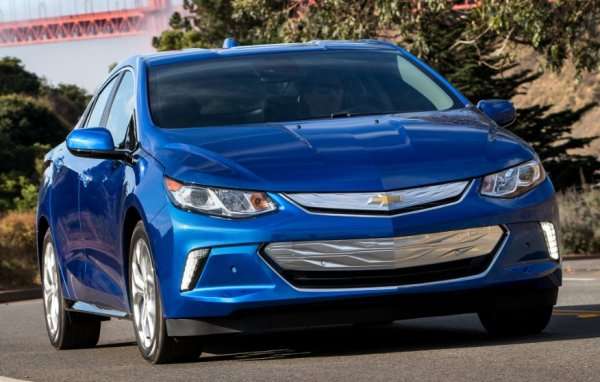 From the crash results to the headlights, the Chevrolet Volt is enjoying time in the spotlight because of its exceptional report from the IIHS.
Advertisement

The 2017 Chevrolet volt has just been awarded the IIHS Top Safety Pick+. This is the highest safety award any vehicle can earn, and the Chevrolet volt took that award home.

For those of you unfamiliar, the Chevrolet Volt is Chevrolets plug-in hybrid vehicle that can go 51 miles on a single charge before the gasoline engine engages.

To earn this award, it isn't easy. The vehicle must perform well in six different categories. The categories include: moderate overlap front, head restraint test, and roof strength. There are also new categories such as front crash prevention, and small overlap front. On top of these tests, the headlights must also achieve an acceptable or good rating.

In both of these tests, the car achieved a rating of "good." The Volts rating increased in the small overlap front test from last year, which was at an "acceptable" rating. Even the headlights were upgraded from an acceptable to good rating.

What made the "+" possible was the integrated front crash prevention system. Two of these systems are automatic braking systems. In one test, the IIHS stated that the Volt completely avoided a crash at 12 MPH, and in the 25 MPH test, the speed was reduced by 5 MPH prior to impact.

The rating of the Chevrolet Volt was good across the board. It's obvious the engineering Chevrolet is putting into their cars are working, and improving year by year.

I think it's awesome that modern cars of today are achieving such positive results on its crash tests. I frequently go for rides in my grandmas 1967 Buick, and it is scary to ride in it. Thinking about the metal dashboard, lack of airbags and lap belts, it spells certain doom if I was to be in a crash. It's quite amazing to think how far safety has come in automobiles. Congratulations Chevrolet.

danwat1234 wrote on September 16, 2016 - 4:16pm Permalink
What's the roof crush strength peak value? Curious if it has improved much. Still not on their site. The headlights, can upgrade the headlights in a 2011-2015 Volt to high end LED kit to improve performance.