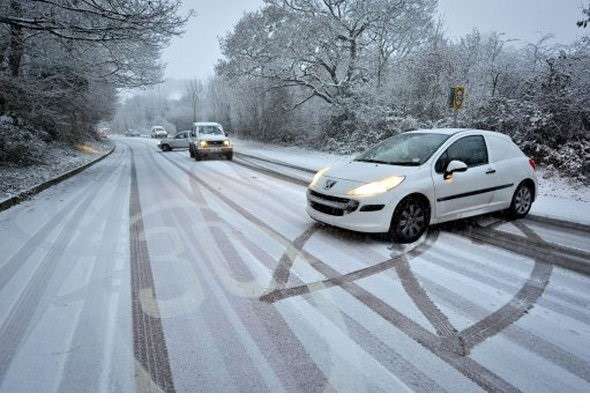 Winter driving info has changed; now it is hit your brakes and hold them hard

Over the last 30 years or so, there have been some subtle change in skid-control safety information. It is information that is not broadly known yet and every driver should know about it.
Advertisement

While watching a weather special on the “Weather Channel” the other day, I noticed one of the commentators discussing her expert opinion of how to stop on ice and snow. Instead of qualifying the information by saying something like: “This comes from the National Safety Council,” or “The AAA advises you to…,” the commentator just charges ahead like the proverbial SUV in an icy skid.

Was the commentator right or wrong

Well, was she right or was she wrong when she said: “Steer in the direction of the skid!” And, “Hit your brakes hard and then pump them quickly so you can stop safely.”

At one time – before anti-lock braking (ABS) became widespread by the end of the 1980s – the information was useful. You had to get on the brakes and off, pumping them quickly. At that time, you were also advised to apply the brakes almost to the point of locking up and then releasing. You had to repeat this move as often as you could.

And, even with the spread of ABS systems, it was still valuable info because ABS systems and their software weren’t sophisticated. At the time – about 1992 -- the ROM-based software was seldom updated. And, given the relative slowness of the control modules, plus the inherent weaknesses of multiplexed, non-networked control systems, the need to assist the ABS in making sure that the brakes were applied quickly was genuine.

This only served to reinforce the idea that you needed to pump the brakes in a snowy or slushy skid. This advice has remained the same for nearly three decades. It’s time for this to change.

The primary reasons the advice has to change are the ABS and its software, the control modules, and the network (CAN) that underlies it all. Looking at the ABS, you find that there have been strides not only in brakes and brake materials but also in the quality of the software that supports it. Now, it works so quickly, the ABS does your thinking for you, so to speak. All you need do is kick the brakes down and hold on. The ABS does the rest. It is because the ABS and braking system assume that if you tromp down on the brakes, then you are in an emergency mode. They react by stepping up their game, releasing and stopping the wheels far more quickly than you might expect. The stop, hold and release piece of the software ensures that the wheels seem to roll continually, however, there’s also that imperceptible near-stop that occurs about 30 to 60 times a minute which is responsible for the perception. It stops your wheels

Then, there are the control modules. Driven by control processors that are within a generation or two of today’s state-of-the-art CPUs and high-speed memory, ABS systems easily handle the demands put on them by poor weather driving.

Finally, there’s the network that takes reports from every sensor that touches the drivetrain, as well as each significant subsystem. Taking that input from systems such as the transmission, the brakes, the engine, even the exhaust system, the network transfers the information to the engine control module. At this time, the engine control module compares its input against its software library routines and slows things down or speeds things up. Without the high-speed CAN (Car Area Network), sending its information across the engine, precision control wouldn’t be possible.

Granted, the meteorologist who provided the information probably doesn’t know about the new driving thinking, so a bit of retraining is needed. However, if, after the training, similar slam brake, pump brake quickly, slam again reappears, then maybe it is time for this particular weather person to stand aside and put more emphasis on areas where she may have more expertise.

Information was once valid, but times have changed

So, what have we learned from all of this? It is simple, part of the information that has been given out for years is correct, while the rest must be modified.

The information remains that in slushy, snowy or icy weather, a driver who feels the car slipping must:

Before the winter sets in, install winter tires on all of your vehicle’s wheels. Winter tires use a softer compound that remains pliable to well below zero, making road grip much stronger.

Winter tires also have aggressive tread patterns that enable your driving wheels to cut through the snow like a mini-tractor. Also keep a set of chains in the trunk, just in case.

Bear in mind that the “winter-rated” or “all-season” tires are not honestly good on anything but cold, dry pavement at temperatures above 40˚ Fahrenheit.

At temperatures below, the tire compound tends to lose its flexibility so that by the time the temperature reaches 32 or so, the tires are little use. And, if the road surface remains below freezing for an extended period, say four days, the frozen road surface does not react with the tires at all.

Be sure equipment is working properly -- defrosters, for example and even a/c

Before you set out on any trip, make sure the defrosters are working correctly and if you do use them, remember to add a bit of air-conditioned air so that any moisture dries out before it fogs up the interior.

Also, it is a good idea to install a new set of wiper blades so that you have the best clean possible.

The author has amassed this information over a long career behind the wheel and in interviews with safety authorities, as well as driving authorities and real-world experience during car evaluations.