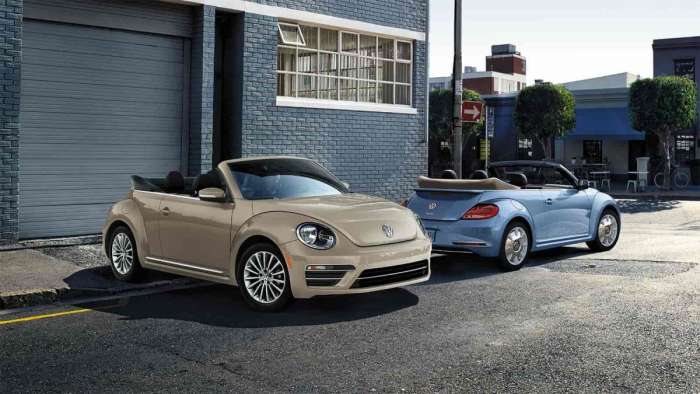 It's a sad but necessary part of the business. When business isn't good and cars are sitting on lots do you know what happens? Unless the automaker is extremely confident of a turnaround, the automaker eventually pulls the plus on the vehicle. That's what happened this week as VW squashed Its slow-sellng, though iconic, Beetle.
Advertisement

An icon of American motoring is the latest to fall to victim to a market that has shunned cars in favor of light trucks and crossovers. For nearly two full model years, buyers have increasingly purchased crossovers and light trucks while sales of sedans have tailed off. Indeed, sedan sales are now dropping like stones.

In this situation, you would have expected some specialty models to last because they are somewhat unique. But, it’s not the case, anymore. Look at the VW Beetle. Buyers have turned away from Beetles as if something disastrous would happen if they purchased a model.

For example, Ford has watched as sales of its once super-popular Fusion have dried up. They have dried up to the point that the automaker has decided to pull out of making cars in a couple of model years. Apparently, Ford is taking the line space to build more crossovers and light trucks as they fight to meet what seems to be a never-ending demand for them. Ford still has plans to build Mustang, one of the specialty marques to survive.

Meantime, VW, unlike Ford and its Mustang, has decided to end the output of the iconic Beetle in 2019. The move closes a chapter on one of the auto industry’s most-storied and longest running marques. Manufacture of the third generation Bug will end at the automaker’s Puebla, Mexico, production facility, in July 2019.

And, though the ending of the Beetle has brought out the usual speculative pieces about VW finding ways to keep the venerable vehicle alive, Hinrich Woebcken, chief executive and VW of American (VWoA), emphasized in a statement that there are “no immediate plans to replace it.” The automaker is using the space freed up to become “a full-line, family-focused automaker in the U.S.” It is ramping up its electrification efforts, as well.

As VW has pulled Beetle from a select group of markets as part of a broader company-wide effort to streamline its bloated product line, the automaker has seen U.S. sales of Beetle tank, dropping 2.2 percent in a market that has switched from cars to light trucks.

Herbert Diess, CEO the VW Group (German HQ), has been driving the slimming of the automaker’s portfolio since he took over in 2015. Demand for the Beetle and hatchbacks like the Golf have come under pressure because of the change in U.S. buying patterns from cars to SUVs and light trucks.

It’s not as if Diess hasn’t tried to find ways to keep the Beetle’s wheels on the road, he has. He has looked at reviving the Beetle as an electric – VW has promised as many as 80 electric models across is divisions by 2030 – going so far, in fact, as touting the upcoming I.D. Neo hatchback as the new Beetle for the EV age.

However, with sales of the Beetle at 15,166 in 2017, the handwriting has been on the wall for some time. The sales are less than one-seventh the sales of the Jetta sedan. Given this situation, it is hard to see exactly how the automaker could go on producing even an iconic model. And though It is just a business decision, it is still axing a vehicle made famous by three movies in the 1960s and 2000s, the “Herbie,” the “Love Bug” series, as well as some notable ads. Each action will, likely, have its consequences. It is unknown what those consequences are.

Beetle Brought Back After 20-Year Hiatus

The original jellybean-shaped was the “People’s Car” of Germany. The government ordered it manufactured before WWII as a small drastically underpowered working person’s car. An air-cooled vehicle whose engine and transmission united over time into a rear transaxle that drove the rear wheels.

Always a small powerplant, the first copies of the VW with its round body and dual-paned backlight were powered by a three-cylinder engine whose meager output was handled by a notchy, finicky transmission. They were not universally popular at first but, given their inexpensive price, the caught on a bit to the point that after World War II the automaker was one of the key manufacturing sites that Germany had to get up and to run.

VW Off And Running; Next Growth

Germany did get the manufacturer running. Its next step was expanding its markets as quickly as possible, so from 1950 to 1979 VW sold the original, “Love Bug” era model in the U.S. market, with changes, of course. VW’s strategy worked as consumers recognized the VW Beetle, even if they didn’t own one. It was the “foreign car” of the era. In the 1960s, there were some memorable ads such as the one that showed a snow plow driver getting into his VW Beetle and driving to the town shed where he picked up his plow and began to work. And, then there was the “favergnughen campaign.” It was a nonsense word that people remembered. It also helped keep VW one of the top manufacturers on the U.S. market.

To mark the end of the line for the Beetle, VW will offer two special models, the SE and Final Edition SEL in coupe and Cabrio (convertible) styles.

“The loss of the Beetle after three generations, over nearly seven decades, will evoke a host emotions from the Beetle’s many devoted fans,” Woebcken said. VW Set Marks That Won't Be Forgotten.

Karl Brauer, the executive publisher of Kelley Blue Book and Autotrader, expects other automakers to scrap other nameplates.

VW To Let the Beetle Go

“Unlike Ford’s Mustang, and, so far, Dodge’s Challenger, and Chevrolet’s Camaro, Volkswagen will let an iconic model die rather than fight market trends,” said Brauer. “While everyone saw the rise of SUVs coming, nobody predicted the level of market share they’d take from cars. In this environment, the business case for cars in general, and small cars, in particular, become increasingly difficult to justify.”

DeanMcManis wrote on September 15, 2018 - 9:39pm Permalink
It is sad to see the Beetle go. But perhaps it will be reinvented as a BEV some time in the future. This latest Beetle was really just a Golf in Beetle clothing, which is actually a good thing. I never owned a bug, but I have had several VW Busses, and I still own a 1959 Karmann Ghia convertible. The styling is great, and it is mechanically simple and easy to work on, but in an age of modern cars it's basic 60 year old design shows up as crude and spartan, because it has no amenities and the engine is so rough it feels like it is going to break at freeway speeds. I am swaying towards converting it to electric, which would smooth out most of the rough bits. I actually think that VW would be more successful building a new electric Karmann Ghia than a Beetle, because the design would be more sporty, and I actually don't see VW coming out with a new Bug in the original spirit of an affordable "people's car" that is just basic transportation, but China might.