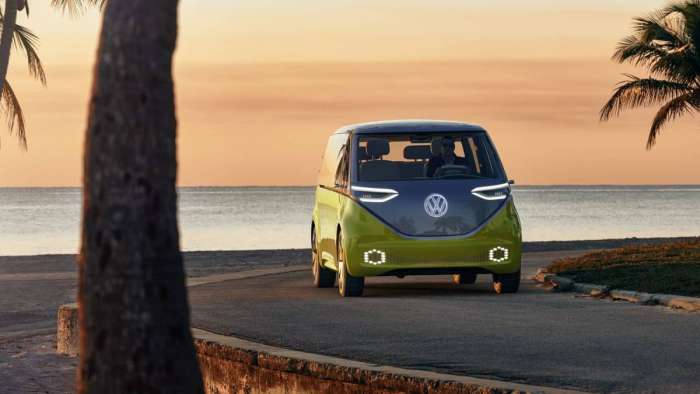 Looking at the future direction of Volkswagen, it is filled with electric vehicles. Indeed, the vehicles are based on the MEB (EV) platform. The same platform will underpin all VW EVs. To give you an idea of the extent of EV plans for VW, the automaker plans to have 27 I.D. vehicles on sale by 2025 or so.
Advertisement

Volkswagen has set an ambitious goal for itself. By 2025, the automaker hopes to be selling 1 million electric vehicles (EV) a year. To reach its goal, VW is taking it in steps.

The first step is 150,000 EVs a year by 2020. From that point, the automaker hopes to reach the 1 million mark by 2025. It is an aggressive goal spurred in part by using the MEB platform, VW’s EV-only platform. The next steps in the program, apparently, are linked to sales.

MEB is VW’s acronym for its modular EV platform designed by the automaker. Its full name translates roughly to the modular electric toolkit. MEB uses a steel chassis system that will be the basis for the automaker’s EVs. It will be used for the next few years to support VW’s I.D. vehicle family – I.D. Buzz, Crozz, and Vizzion. More vehicles that will use this platform are in the planning phase.

The MEB platform is rear-drive. It uses an AC induction motor system, located on the front axle. The platform supports all-wheel-drive (4Motion) through a pair of synchronous induction motors. VW plans to use the same platform for high-performance vehicles by changing gear ratios in the single-speed automatic transmission. By adjusting the software controlling the motors, VW will be able to pump more current through the AC motors increasing performance. VW proved the concept at this year’s Pike’s Peak Hill Climb where its high-performance EV entry took the record for the climb by more than a minute as the sleek entry raced up and outpaced the course.

Meantime, VW is reportedly looking toward the future. It plans to enable the MEB platform to accept future technologies or those in use by the Volkswagen Auto Group. Some of those technologies include the inductive charging architecture; augmented reality heads-up displays, and autonomous driving technology when it becomes available. There are vehicles on the market with systems that look autonomous but which are not.

MEB vehicles will reportedly use two tiers of batteries. The low-end range will run from 48-kilowatt hours (kWh) to 64 kWh. Meantime, the upper end is 80 to 82 kWh. Then there’s the 111 kWh option used on the I.D. Buzz concepts so far. The 111 kWh unit is good for up to 340 miles, according to the World Harmonized Light Vehicle Test Procedure standard. Most of the MEB-based vehicles have ranges of between 175 and 300 miles using batteries supplied by LG and Samsung.

I.D. hatch production will reportedly begin next year; it is a Golf-sized vehicle. Next, VW plans the I.D. Crozz, the I.D. Buzz (Microbus-styled vehicle), and the Vizzion sedan. They are only a part of the 27 I.D. products slated for worldwide availability worldwide n 2022.

DeanMcManis wrote on September 27, 2018 - 10:49am Permalink
It is an ambitious goal, but VW has the engineering expertise to pull it off. The critical stage is going to be the next few years, where the MEB platform's price, range, and charging infrastructure will be critical to VW's success in getting a large group of car buyers to switch over to electric from gas. Personally, I am hoping that VW has the foresight to come out with some BEV sports cars and sport sedans along with the Buzz transporter, ecoboxes and CUV EV offerings.