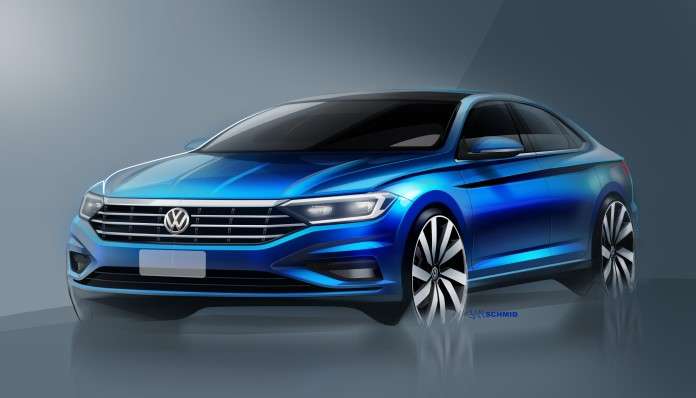 Volkswagen held a debut Tuesday where the 2019 Jetta was introduced to the automotive press. The automaker plans to the global introduction at next month's North American International Auto Show.
Advertisement

With Jetta staging a mini-rebound in the market this year, following five years of slipping sales, VW is looking to 2019 when the redesigned compact sedan series will be ready for sale. Until then, the automaker is relying on its current, aging model to carry things along. Indeed, 2017 has been a good year for Jetta as it has seen a small sales gain of 0.5 percent through November to 108,574 vehicles.

Though buffeted by the Dieselgate scandal and by the continued shrinkage of the compact car market, Jetta held its own. Indeed, Jetta has been VW’s best-seller in the U.S. and was a market leader for the automaker, though, VW has been changing direction to take advantage of its lengthened Tiguan and the three-row crossover Atlas, whose sales have been growing since they launched last summer.

VW plans significant changes to Jetta when it reappears for sale as a 2019. The automaker introduced the updated vehicle in New York City Tuesday. The changes include better driving dynamics, increasing levels of technology and further use of the automaker’s MQB platform that has been at the heart of other changed models – Golf or Atlas comes to mind – in the last couple of years. VW teases 2019 Jetta ahead of official debut.

Hinrich Woebcken, chief exec of VW of America, told the press, as reported by Automotive News, that it is “important that it’s our high-volume car, so this car has high-volume expectations, so we put a lot in there necessary to make it a great concept … It’s the only German-engineered car in that segment (compact).”

Buyers who anticipate purchasing the restyled Jetta won’t have long to wait as it will appear about mid-2018. Its powerplant will be VW’s 1.4-liter, turbocharged, inline four. The engine cranks out 150 horsepower. Buyers will have the choice of an eight-speed automatic or a six-speed manual.

As noted, Jetta will share the same flexible MQB platform that has been the basis of vehicles ranging from the Golf family all the way to the Atlas, three-row crossover. Using the same underlying platform lets VW introduce cost savings. For example, rather than using different equipment on individual lines, VW can use the same parts in all its vehicles, or economies of scale. For instance, Matthias Erb, chief engineering officer, said the automaker could share equipment between luxury and standard models. In 2019, for example, post-collision braking is standard on Jetta, with optional blindspot monitoring, rear park assist, and adaptive cruise control.

For example, the 2019 Jetta buyers will get post-collision braking standard, with optional blind spot monitoring, rear parking assist, and adaptive cruise control. By using the “platform [strategy] … you can afford to” offer state-of-the-art driving assistance” to the customer, while remaining price competitive with models that don’t offer as much.

VW outlines some of Jetta’s many features

Among Jetta’s many standard features, buyers will receive standard LED front and rear exterior lighting. And, the cockpit will mirror the design of the 2018 European Golf. Also, Apple CarPlay and Android Auto-compatible infotainment systems will be available.VW did not discuss pricing.

Jetta will have its international debut at next month’s North American International Auto Show in Detroit.

Daniel wrote on December 13, 2017 - 7:12am Permalink
I thought they were going to stop selling the jetta but maybe that's in the UK.