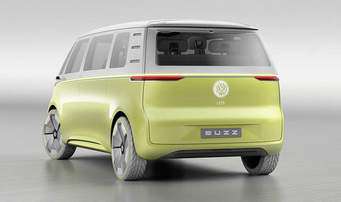 Popular Mechanics has named Volkswagen's I.D. BUZZ as winner of the Concept Car of the Year for 2017. The first models based on this concept are scheduled to appear as 2019 models.
Advertisement

With the New York International Auto Show about to kick into high gear, Volkswagen has won the Popular Mechanics’ Concept Car of the Year Award. The I.D. Buzz concept that took many of its styling cues from the iconic VW Microbus MPV, popular with many drivers in the 1960s.Up close and personal with VW I.D. BUZZ Concept

First shown at Detroit’s North American International Auto Show in January, the honor came when the publication announced its Automotive Excellence Awards at the New York exhibition. The magazine’s editorial team chose the I.D. BUZZ Concept Car to receive the award. The vehicle received the award because the editorial team believed the Buzz represents the best in automotive design, execution, and technology.A Walk Through VW's I.D. BUZZ Concept

“We are thrilled for the I.D. Buzz to receive the Concept Car of the Year Award. This concept represents how Volkswagen is combining our rich history with fresh takes on modern mobility,” Hinrich J. Woebcken, chief executive of the North American Region, Volkswagen, said. He said the reaction to the concept electric has been fantastic.

Ezra Dyer, Pop Mechanics’ automotive editor, said the criteria used to determine the Concept Car of the Year Award was simple: “Which concept car do we most fervently hope actually reaches production?”

The I.D. BUZZ isn’t a complete flight of fancy

“The appealing thing about the I.D. BUZZ is that it doesn’t come across as a complete flight of fancy. Volkswagen could build an electric Microbus throwback – and we hope it does,” Dyer emphasized.Popular Mechanics Honors VW BUZZ Concept

More to the point, Volkswagen has already acknowledged that the I.D. BUZZ Concept Car series will become production models, led by an updated Microbus in 2019. In 2021, the Microbus-styled I.D. BUZZ will be joined by a hatchback. And, in 2025, an SUV will become part of the lineup, as well. (refer here)

When the four-cylinder, rear-engined Microbus MPV debuted after World War II, the iconic vehicle that looked a lot like many of the buses on the road then, became a hit among those who valued a design that maximizes interior space usage. Microbus owners appreciated the utility – and ruggedness – of a vehicle that could haul quite a bit but which sat on the outline of a medium-sized passenger car.

The I.D. Buzz Concept Car series includes such features as multi-variable seating and interactive connectivity. Using flexible MEB XL design platform, the Microbus-styled MPV is about 195-inces long, 77.7 inches wide and 77.3 inches tall. Looking at the generous lines, you can easily see that it offers an enormous amount of interior space.

The I.D. Buzz Concept car is the second electric model slated for the I.D. range of cars. The design, in particular, shows just how well suited the Modular Electric Drive Matrix (MEB) is for larger electrics as well. There is more than enough space to house the batteries and drive system within the floor. The driver and passengers will, in turn, find lots of interior space for traveling long distances in comfort