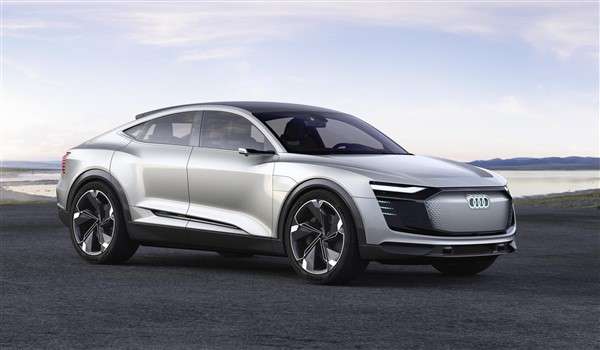 Volkswagen announced a few months ago that it would have 30 new electric models on the market by 2025. The automaker has kept up its pressure to meet this goal by announcing several electric models late last year and early this year. Audi this week said it would launch the e-tron performance Sportback as a 2020 model. It is based on the concept shown at Shanghai last month.
Advertisement

Volkswagen and its subsidiaries are making good on their promise to bring out 30 new electric models by 2025. Indeed, the automaker’s e-product blitz continues, this time with Audi leading things.

According to Audi, the VW subsidiary will bring its e-tron Sportback to the United States as a 2020 model. Audi unveiled the Sportback as a concept at last month’s Shanghai auto show. The e-tron Sportback Joins Audi lineup in 2020

A Quattro crossover, based on e-tron developments precedes the Sportback. The crossover will have a conventional roofline, and its interior will be more spacious. The crossover was a 2015 concept. Now that it has been given a place in the carmaker’s lineup, it turns out that it will be closer to the Sportback concept vehicle. The crossover joins Audi’s lineup in 2018.

The e-tron Sportback uses a heavily modified MLB Evo modular longitudinal platform. That platform is shared with the A4, A5, Q5 and Q7. The new e-tron Sportback is a premium electric. Planning calls for an e-tron model that offers up to 500 horsepower. So, not only will the Sportback be a premium vehicle, but it will also provide high performance. Audi e-tron Crossover Will Be 2018

According to Audi, the upcoming production vehicle will reflect the styling show in Shanghai. The new e-tron includes a large tech package which includes, where legal, exterior cameras and organic light-emitting diode (OLED) interior screens that will replace conventional rearview mirrors. Pricing for the new e-tron Sportback is set to start about $70,000.