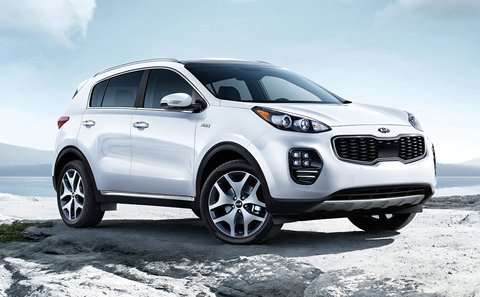 There’s A Lot To Be Said For Auto Spies; How Else Would We Know Of New Kia Crossover?

Auto spies saw the planned Kia compact crossover recently as the carmaker put the as-yet-unnamed vehicle through its paces. Kia is slotting it below the Sportage which is illustrated above.
Advertisement

Although it hasn’t been seen in the wild on the East Coast yet, automotive watchers have reported sightings of the new Kia compact crossover romping on the roads somewhere in the Southwest. Of course, there’s little you can tell from photos of the sighting other than it is shorter than Kia’s Sportage crossover. Indeed, planning calls for the newly spied Kia model to be slotted in under the Sportage.

The sighting reported by Automotive News came late last week. The car spies who saw the Sportage’s little sibling noted that it was all decked out in the usual camouflage that automakers use to keep spying eyes from seeing exact details.

Despite all the deckage, the spies were able to find a few things about the little Kia. It looks like shrunken Sportage with some modifications. It features a longer hood, slightly swept roof and what looks like a rounded, swept rear hatch. The lines of the rear were semi-obscured by the camo, but there was enough visible to hazard a reasonable guess as to the rear lines.

A smaller vehicle, the Kia compact crossover will likely have much more limited cargo capacity.
The new Kia is slated to compete against:

Plans call for Kia to share the platform with another compact crossover that is expected from its parent Hyundai. The compact crossover will likely take much of its styling from the Provo concept vehicle that was unveiled at the 2013 Geneva Motor Show. Production is slated to begin sometime late in 2017 so the new crossover will go on sale as a 2018 model.

Though people who follow the auto industry closely or who have an interesting in the marque know that Kia is a subsidiary of Hyundai, the majority of people think that Kia is an independent automaker. It is readily apparent that when you look at Kia models and Hyundais side by side that there’s a rather close relationship between the two, however. For example, though the Optima is a Kia if you look closely at its outline, its swept roofline, and the rear end styling, you can easily see the Elantra from Hyundai staring back at you.

Kia In The U.S. Market for Years

Kia has been active in the U.S. market for about the last 30 years. The first vehicle that appeared here was the Sephia which was followed by the Sportage. Though the Sephia is now history, the Sportage is still very much alive, well and living in Kia showrooms across the nation.

A product of the 1940s, Kia made several attempts to enter the automotive market in the 1950s, 1960s and 1970s. These efforts met with little success. In 1981, Kia virtually pulled out of the auto market, a situation that was to last about six years. In 1987, Kia reorganized and began a new, and more successful, effort in the automotive market. Sales were never high, and the automaker had to revamp its efforts in 1992 again when it brought out the two models aimed at the U.S. market. The Sephia was first, and the Sportage was second.

Sales were never particularly strong and Kia ran into trouble in 1996 which forced it to declare bankruptcy. A bidding war ensued between Ford and Hyundai. When the dust settled, Kia was part of the Hyundai empire.