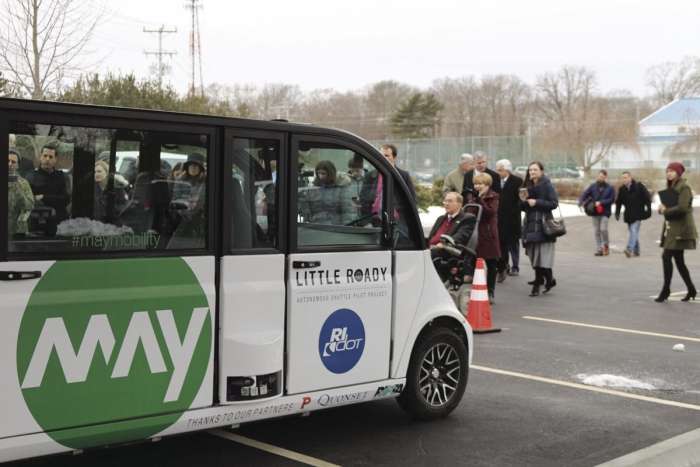 So Who Does Get The Ticket If The Vehicle Drives Itself?

It didn't take long for the odd-looking vehicle to have a visit from the local constabulary. As Providence, R.I., tried out a new autonomous loop for its downtown area, a police car, lights flashing and siren wailing, stopped the pilot program in its tracks briefly while the officer and the attendant of the "driverless" vehicle had a nice chat.
Advertisement

Here’s the question of the day: how can a police officer ticket an autonomous vehicle? Does the officer write up the vehicle or its attendant and have it hauled off to the impound lot for 90 days? And, what happens to the poor autonomous vehicle when it is waiting for its release from impound? Is it placed on DC instead of AC (this one is really brutal for some poor electric vehicles)? Or, is the attendant ticketed for “driving” the autonomous, even though he or she is just sitting there watching traffic? (Each shuttle has an attendant for those times when human intervention is needed.)

Many Questions And Few Answers

There are just so many questions about this burning issue? And, what about any passengers? Are they just left at the roadside or are they trundled off to durance vile to await their fate for riding in the offending autonomous vehicle?

Questions; questions; questions, and no clear answers; Providence Police Chief Hugh Clements did have an explanation of the vehicle stop for the Associated Press. He said one of his officers pulled the weirdly shaped vehicle last Wednesday because he had never seen one before. “It looked like an oversized golf cart,” Clements said in an interview.

Operated by Michigan-based May Mobility, the vehicle – which admittedly looks like it has two front ends – was dropping off its passengers at Providence, R.I.’s Olneyville Square when a cruiser showed up with its lights blinking and siren wailing.

Program Starts And Vehicle Is Stopped

The traffic stop happened only hours after the launch of a shuttle service pilot project launched by Rhode Island. The free shuttled links 12 stops in downtown Providence, one of which is a train station. Called “Little Roady,” the shuttle holds six people, including the attendant. The attendant is there for those times when self-driving (autonomous) technology falls short. For example, difficult left-hand turns into oncoming traffic usually require human intervention.

If you are wondering why a state-run program ran into a minor police intrusion, the answer: the officer was curious about what was happening. There were no tickets or warnings issued, in all honesty. Instead, the officer had a very cordial chat with the attendant, said the police chief.

A co-founder of the program said the pilot’s point is learning. May Mobility’s Alisyn Malek said:

“The officer was curious. That’s something we see and welcome. It’s a great opportunity to be able to have the dialogue about who we are,” and “why we are out on the street,” said Malek, who is also May’s chief operating officer. The program is seeking input about how Providence's pedestrians, motorists, and police can coexist.

New England’s drivers have reputations for their impatience and aggressiveness. So, local officials have braced themselves for driver reactions to the slow-moving shuttle coaches.

Built by Minnesota-based Polaris Industries, the vehicles have glass roofs and resemble tiny buses with seats that face each other. It is a rather snug fit for each.