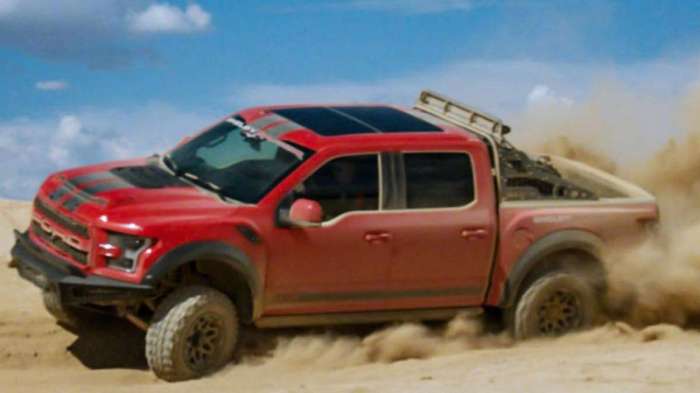 By the time Shelby American has tuned, massaged, and tweaked the Ford F150 Raptor they have taken an excellent product and made it even better.
Advertisement

I don’t know if you watched the latest installment of the “Jurassic Park” quadrilogy or whatever it might be. You already know the basic story: island in the middle of nowhere; lots of animals reanimated through the magic of needles and cloning; people getting eaten; people getting squished, and heroes running for their lives one or to snaps away from the jaws of old-fashioned first-generation raptors only to run into the latest and greatest second-generation Raptor that the evil guy behind it all has had his dino design team create.

In a nutshell, that’s pretty much the plotline and action of the latest version of what I will rename the Raptor Chronicles. Let’s focus on the critical piece of the Chronicles, the newly created, bigger and better, meaner, and nastier Indoraptor. In other words, it was better at being a Raptor than the first-gen “little Raptors.” And, by now, you are either shaking your head, asking, “What’s wrong with this guy?” Or, “Does he know what he’s talking about?” Or, Why the heck is the editor letting him write this nonsense on a car site?” Indeed, I haven’t mentioned any wheeled-conveyance (a fancy name for a truck), but you have stayed with me so far (I think), and I’ll reward you with why I ran off into the Jurassic World.

You see, Shelby American, the same guys who bring you performance machines like the Super Snake which reporter Jimmy Dinsmore discussesthe bolder Super Snake. and the Shelby GT500 Mustang, has taken Ford’s desert-running F-150 Raptor and improved on the concept. Or, as Shelby puts it, they have turned “the capable machine into an extreme off-roader with key enhancements to the truck’s suspension, power, and styling.” They did this a couple of years ago with an earlier version of the Raptor, but now, with a lighter body, they have managed to make an already capable pickup into something incredible.

Shelby has upgraded nearly every area of the pickup. For example, the Shelby engineering team has added a custom cold-air performance intake system and tune. The intake feeds Ford’s Performance EcoBoost engine, and it turns the twin-turbo V-6 into a fire-breather that cranks out 525 horsepower and a huge 610-plus-pounds-feet of torque.

The engine improvements, alone, make the Indoraptor, oops, the Shelby F-150 Raptor, an excellent motoring machine, but it’s a machine that isn’t balanced yet. It needs other improvements to work with the engine and 10-speed transmission so that its performance is a finely balanced whole. To that end, Shelby has turned it up several notches in the suspension system, starting with a three-inch lift.

The Shelby engineering team took advantage of a Fox Racing four-corner adjustable suspension system that, using reliable technologies, adjusts to any terrain from ironing-board-flat like city streets to tracks in the middle of nowhere with a simple no-tool-needed adjustment. The high-performance suspension rides on 18-inch alloy wheels shod with BFGoodrich KM2 35/12.50R18 tires.

On the outside, the Shelby Raptor has a fully functional ram air hood scoop that carries Shelby lettering and striping. A custom front bumper, rear bumper, and chase rack that also carries Shelby lettering and striping give the Raptor a distinctive look. Also, the Shelby Raptor features an eight-LED light configuration, as well as mounts for two spare tires. Metal rock sliders with automatic running boards complete the exterior.

The interior features embroidered customer leather seats, floor mats, and console badging. Each Shelby Raptor sports a dash plate that carries the vehicle’s number used in the official Shelby Registry. The Shelby Raptor is available through authorized Ford Shelby dealers in the United States and Canada. A limited-edition, Shelby will build 250 units this year. Each copy will cost $122,135.