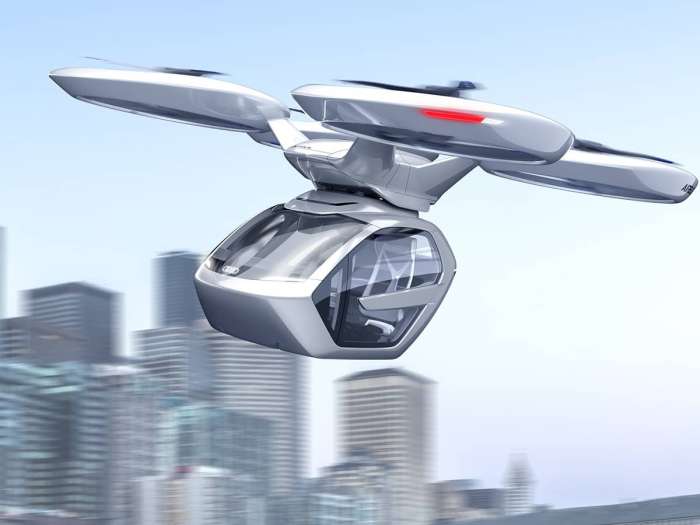 The next time you are in Ingolstadt, waiting for your cab, you might try looking up and watching. The reason is that your taxi is coming, however, this time it will be flying. Meet the flying taxi by Audi, Italdesign and Airbus.
Advertisement

It’s a specialized test fleet of dedicated flying taxis that will pick you up and zip you over the day’s traffic jams, and when you are ready to head back home, another flying taxi will land on the roof – or yard or roadway or wherever – pickup you up and whisk you home.

At least, this is the intent of a letter signed by Audi, Airbus, and the German government. Indeed, the automaker – soon to be a quadricopter maker – will be testing the concept of flying taxes in and around the city of Ingolstadt, also Audi’s headquarters.

The trial, according to an emailed government statement, is meant to counter clogged roads and unlock the potential of the German high-tech industry.

This is a ‘New Dimension of Mobility

“Flying taxis aren’t a vision any longer; they can take us off into a new dimension of mobility,” Andreas Sheuer, Germany’s transport minister, said. “ They a huge opportunity for companies and young startups that already [have developed] this technology very concretely and successfully.”

Flying cars, once the realm of science fiction, are no longer part of a sketchy view of a future that might or might not happen. At the Geneva Auto Show, last March, Audi, Airbus and Italdesign, presented that they called Pop, Up Next. It was a mobility concept based on an ultra-light, two-seat passenger cabin. The cabin can be attached to either car or drone.The future of mobility is here, if you like flying.

An Electric Copter Could be the Sneak Winner

Meantime, a German startup, Volocopter, has built an electric copter to ferry travelers around the city. The necessary helicopter has completed its test flights. It seeks to start its commercial trips in the next three to five years. Volocopter is a startup backed by Intel and Daimler. Its work has been on a drone-like device.One of the major ideas in flying taxis.

Finally, Geely, owner of Volvo, recently acquired Terrafugia, a U.S.flying-car developer.Not to be outdone, an electric copter may be used.