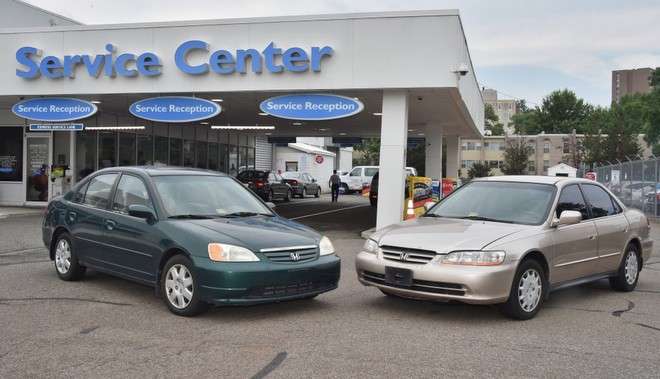 Even if Takata, the number two airbag manufacturer, crumbles and fails to repair every airbag, the National Highway Traffic Safety Administration has put automakers on notice they are responsible to see make sure the airbag recall work is completed.
Advertisement

Unless you have been living on an island in the middle of nowhere that lacks even the basic communications essentials – the Internet, smartphone or just plain old-fashioned radio – then you probably realize there is a bit of a crisis going on in the airbag world. For a long time, Takata, one of the world’s biggest airbag manufacturers, has been producing faulty airbag inflators that are dangerous. The devices are the proverbial things that go boom in the night, to paraphrase an old cliché. They have been linked to 16 fatalities and more than 100 injuries worldwide.

Last year, the National Highway Traffic Safety Administration (NHTSA) achieved an enormous first on this issue. It obtained a consent decree from Takata, manufacturer of the airbag products that are at the center of the crisis. Takata, under the agreement, admitted its products were faulty. That achievement, though, has been overshadowed by another even more important happening. Because the airbag manufacturer is on the hook for up to 70 million airbag inflators and because it has been found guilty not only of dragging its feet but also misleading investigators, it has been fined more than $100 million, a record for the NHTSA, at the time of the finding. The penalty could go up or down, depending on compliance.

Because of the need to ramp up its facilities to produce millions of new inflators, as well as the need to update its products to make them safer, Takata has been falling further and further behind the financial eight ball. It is now to the point where the airbag manufacturer is seeking either a partner or a takeover to assure its survival. It is talking with prospective candidates now. It could complicate the issue as a takeover would mean a new company dealing with already existing conditions and new voices that could raise matters that are unknown now.

And, if Takata is unable to find its “knight,’ it is possible that financial issues could keep it from fulfilling all of its obligations. If this scenario were to play out, the 20 automakers involved in the Takata airbag crisis must step up, Mark Rosekind, NHTSA administrator, stated recently.

In meetings about the time of the SEMA show in Las Vegas, automakers were told they have the ultimate responsibility for replacement of the deadly airbags. Rosekind told them frankly that no matter what the fate of Takata may be, each automaker has to get the job done.
Ironically, the industry isn’t sitting on its hands, waiting. Automakers are ramping up to handle
the largest-ever safety recall. Honda's Faces A Daunting Task In Airbag Notifications

The Trouble Is In the Propellant

The trouble-plagued airbag inflators have one thing in common: Takata’s favorite propellant, ammonium nitrate. There’s a problem with the propellant. Over time, it deteriorates due to heat and moisture exposure. At some point – when the graph lines converge – the propellant becomes dangerous. The ammonium nitrate becomes unstable, creating a blast that is far too powerful. The blast that not only ruptures the airbag but also shatters the metal housing. The housing becomes shrapnel that scythes through the passenger compartment, killing or wounding those inside.

Takata’s original problems seem to have come from about the time the airbag manufacturer changed basic engineering and technology on its products, although the manufacturer did not change propellants. (It is interesting to note that sometimes when there are changes to basic building methods, materials and engineering, there is a core group of vehicles that is affected by problems that are magnified by the very fact that they are the first vehicles to use the technology. When Takata changed technology in the 2000-01, the airbag manufacturer, unfortunately, created a core group.)

In June, NHTSA identified 300,000 2001-03 Honda and Acura vehicles that were at far higher risk of airbag failures than others on the road. This core group stands a 50 percent chance that the front airbag inflators will go off, injuring or killing those inside on deployment. Indeed, the Honda driver killed in Riverside, Calif., in late September was driving one of that group of vehicles. At least 10 or more recall notices were sent to the various owners of the subcompact but no one ever had the work done, including the last owner who died in the September crash. NHTSA considers the problem so great that it has urged drivers to pull over and park, leaving their vehicles until they could be towed into a service area