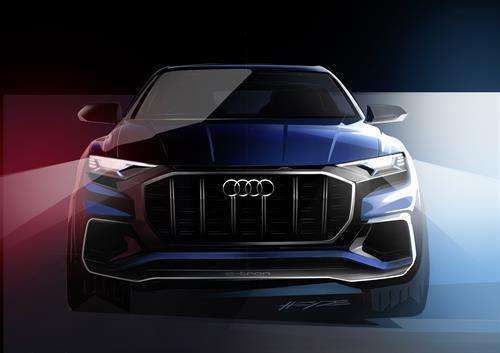 Here Is Why Automakers Like Car Shows; Facetime With Nameplates

When the North American International Auto Show opens in Detroit next month one of the features will be Audi's near-production concept Q8. The almost-ready-for-production nameplate illustrates a unique SUV done in the style of a coupe.
Advertisement

For years, there has been a debate going on in the car industry about whether big auto show venues are good for the automaker or just public relations. It may seem a bit contradictory, but if you look at it, in light of the growth of the internet and interactive websites that offer 360-degree panoramic views of models, then you can see why there is a debate.

Frankly, it is far simpler and less expensive for an automaker to design and set up a new website that can serve millions than for the same automaker to send copies of new vehicles, plus personnel to talk with auto show-goers to even the major exhibitions. At best, the number people who might be reached, even at the largest auto shows, is, perhaps 2 million, while the website’s reach is far broader. Yet, the car industry persists, year after year, in fielding examples of its products and product experts to travel to Los Angeles, Chicago, Detroit, New York, Geneva and even Beijing, where the public can look at their products and the automakers can talk with potential customers.

Getting A Feel For Vehicles

That feature, however, the ability to talk to customers and instill a sense of a vehicle and its excitement, in many cases, outweighs the built-in savings of an interactive website. No matter how realistic the views on a website are, it still doesn’t replace the experience of opening a vehicle’s door, sitting behind the wheel, feeling the upholstery and sensing the environment. There is no comparison and, many times, it is just touching the real vehicle is all that’s needed to bring in a new customer who will sign on the bottom line.

The experience is why an automaker like Audi plans to bring a near-production concept copy of its top-of-the-line Q8 big crossover to Detroit next month. The Q8 offers the spaciousness and luxury that is typical of a flagship model. Its lines are very reminiscent of coupes. However, the Q8 is, in reality, a four-door sports utility-style vehicle. The Q8’s primary competition is the soon-to-be-introduced BMW X7. The BMW is another sports-ute whose flat rooflines and overall styling is reminiscent of large coupes.

Audi’s design chief, Marc Lichte called the Q8 concept a vehicle that “evokes sportiness and prestige.” He continued that the SUV has “created a new spearhead within our Q model line.”

Looking at the Q8’s flat roofline, one might think that headroom would be limited. However, that is a bit deceiving as the luxury SUV offers more than enough interior space for its four occupants.

Some of the lines harken back to the Ur-quattro of the 1980s, said the automaker. For example, extremely flat, but extra-wide C-pillar and the rather prominent shoulder flares over the wheels are reminiscent of the 1980s nameplate. The modern styling elements include the Q8’s octagonal grille. The single-frame grille is considerably wider and functional that the grille on current production models, but it works well.

In production, the Q8 will be built on VW’s latest platform. The MLB platform, also used on the Q8 and Bentley Bentayga, is scalable so that it be used to develop new VW models. Its ability to accommodate small to large styling keeps development costs down while also ensuring overall quality.

In announcing plans for the luxury flagship last year, Audi said the Q8 would target markets in the U.S., China and the Middle East. Each market is an area where large SUVs with broad, flat rooflines – reminiscent of couples – are in demand.