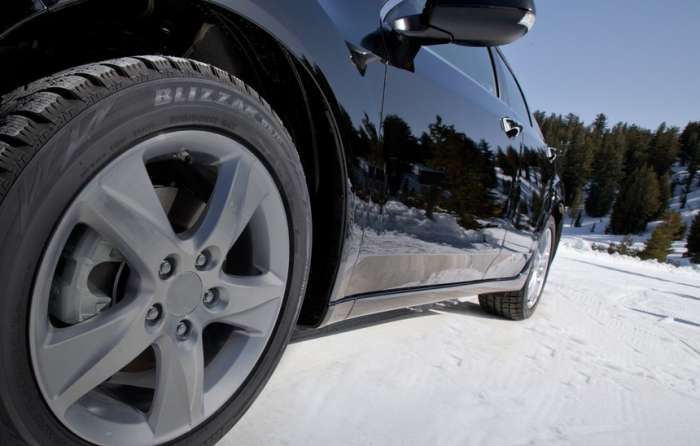 Here’s How Winter Tires Work And Help You Stay Safe In Ice, Slush and Snow

Because of their construction, winter tires are best for cold temperatures where snow and ice are common. All-weather or all-season tires don't handle things nearly as well.
Advertisement

Okay, you’ve seen our “how-to” guides on buying where to buy winter tires, what to look for and where you can find it, right? It’s all great information because Torque News writers are all not only certifiable gearheads but they are also experts in the art and science of the automobile.

So, rather than re-plow old ground to bring you information that has appeared recently, here’s some information to think about while you are having your first cup of coffee today. The info is about how your car’s winter tires work.

Let’s clear something up right at the start: have you ever seen or used the words “snow tires” in mixed company? Granted, there is a four-letter word in there (SNOW), but, aside from that nasty word, but have you ever uttered the words “snow tires”? If you are of a certain age, you probably have used those words quite a few times in your years behind the wheel. The words described the tires functionality and capabilities with clarity. “Snow tires” were meant to be used in the snow; if you used the on dry, warm roads, they performed poorly. Indeed, if the road became wet in a rainstorm, the poor performance went downhill very fast.

Somehow, somewhere the “snow tire” morphed into the words “winter tire.” It happened several years ago in one of those places where things like morphing happen (it is an unknown realm that exists somewhere and is dedicated to nothing but morphing – changing). So, as they say in the world of numbers, “snow tires” equal “winter tires.”

You might be wondering exactly why your vehicle would need a particular set of winter tires, in the first place? It is a good question to ask. The primary reason is safety. Winter tires are made to play in the snow; they aren’t especially good at doing much else. In the snow, though, they will get you through when you average “all-season” tire spins helplessly away looking for traction.

At this point, it would be easy to go off and talk about tire chemistry and design and a host of other things that affect tire design. However, they are distractors from the main idea here, and that is to tell you about winter tires and hope that you will install them because of their inherent safety in snow. Let’s also take this a bit differently. Instead of crafting a saga-length composition that weaves threads of tires in and out like a large tapestry, we’ll just use a question-and-answer format. It’s the best one to get the points across.

The simple answer here is everything. Their construction, their compound, their tread patterns are all inherently better at working in cold and snow.

Could you explain a little more clearly?

Indeed, we’ll focus on the overall compound of the tire to show you why winters won’t fold up and run away at the first sign of snows. When a tire design specification is set, one of the key pieces of information is what is it going to be used for. When the design team knows this, it can develop the compound, tread pattern, tread and sidewall construction and other factors such as load, heat ratings and the like. In a winter tire, the assumption made before the designers begin is snowy, cold weather. This type of weather is tough to figure out because a misstep in just one piece will throw off the tire. Nowhere is that more important than in the compound of the tire – the material it is made from. If the tire is too soft, it may be overly aggressive and tend to block up or even seize up in the snow. If the tire is a tad too hard, then it won’t perform well in the cold, ice and snow. A winter tire must be able to grip not only on bare pavement but also in hard-packed snow. It is a function of the load as well as temperature and design, among other things. Winter tires must remain flexible and grippy – but not too malleable – down to temperatures approaching 25 below or more.

Okay, you’ve said a softer, grippier compound is important, is that all?

No, it isn’t. As noted, the construction of the overall tire; the carcass (which includes the sidewalls, under-tread structure and plies, as well as the tread); the design of the tread, and the manner in which the tire puts the tread onto the road or snow surface.

How can the sidewall influence the way a winter tire works?

Is that all there is for the sidewall?

No, it isn’t because the place where the sidewall and tread join – bead edge – must not only be strong enough to handle the task of keeping the tire on the road surface with sufficient force, but it must also handle heat dissipation in warmer weather as it wicks heat away from the tread. The bead edge also has to hold up to lots of wear and tear so that the tire gives good mileage.

This is a double-edged question: how does a winter tire affect a car’s mileage; and how does the tire wear?

In general, the winter tire will cut somewhere between two and four miles per gallon from your overall mileage figure. The reason is that the softer compound takes more energy to move from rest as well as keeping going at speed. A winter tire will last between 20,000 and 30,000 miles, possibly less over time, if you use it outside the winter season. The buildup of heat and the soft compound cause winter tires to wear fast in spring and summer driving

Exactly how does a winter tire work?

Thanks to the soft compound, the winter tire can bite into and through light powder snow so that you the tread has good contact with the road surface. If the surface is crusted with hard-packed powder, the soft compound allows the tire tread to put maximum grip onto the snow, literally biting into it a bit so the tire grips as well as it can. The same applies to slush or ice where there may also be more slip present thanks to the slight film of water that is melted off as a heated tire runs across. It’s not a factor many people realize; despite the air temperature, you will find a thin layer of water between the tread and the ice surface, so the tire tries to ride along the boundary. The tread tries to push through the water and grip as much of the ice as it can. Slush is wetter than snow, and the added water tends to have the tire surface slipping along on the surface. Again, the tread pattern and construction tend to cut through and push down on the tread to grip as much surface as it can. The sidewall construction and the ability to keep the tread on the surface also contributes to the capacity of the winter tire.

Do winter tires work better on one surface than another?

Winters are fans of powder snow and packed-powder. However, they work pretty well on ice and slush as well.

The tread on winter tires seems very blocky, almost tractor-like, on some tires. Is this important?

You bet it is. The blockier the tread, the better the gripping ability of the tire (think of that tractor tire, and you can get the idea; it has fewer but bigger, wider tread for maximum soft-soil traction). Also, the design of the tread also affects the way the tire sheds water or snow.

Why don’t all-season tires or all-weather tires work as well as winters?

Frankly, they are not built to handle the cold, ice and snow, despite their name and advertising. All-weather tires are designed to work in a temperate climate, at temperatures over 40 degrees and less than about 80 degrees Fahrenheit. If the temperature drops too low (under 35 or so), the tire becomes too hard to grip well. And, as the temperature drops, the ability of the all-season is further compromised. The result is that on ice or snow, or even chilled road surfaces, the all-season just slides along if you wallop the brakes. On the other side, at temperatures over 75 or 80, the suddenly too-soft compound (yes it goes from hard to compliant to too soft quickly in the heat), takes a beating and wears excessively.

Finally, how many winter tires should you install?