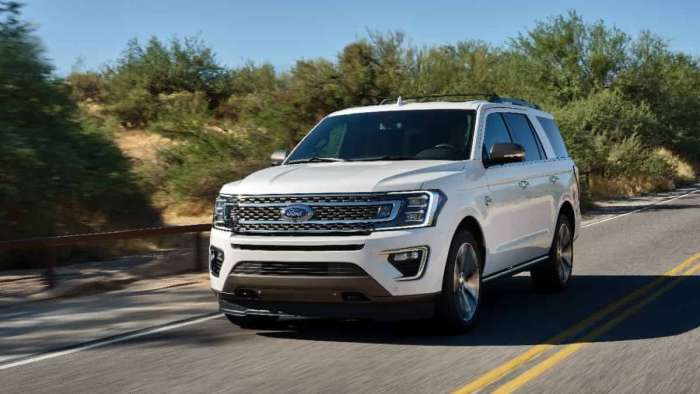 Though it is a small recall, it still is important as Ford has recalled some of its 2020 Expeditions to repair a bad front-seat sensor.
Advertisement

As Ford Motor safety recalls go, this one isn't about to knock anyone's socks off. By comparison to the significant F-150 and Raptor recalls lately for the 10-speed automatic transmission, this particular recall is downright puny.

Ford Expedition Recall Not The Largest

Recently, for example, Ford recalled half-a-million F-150 and Ranger pickups for problems with the 10-speed automatic transmission. Indeed, earlier this year, the automaker recalled more than a million vehicles to fix a rear latch.

On the other hand, the manufacturer has had other smaller and far more mundane recalls to fix problems like this one, the front-seat passenger seatbelt.

And, whether the problem is a significant issue such as the rear bed latches on F-150s or the 10-speed automatic or something as small as a seatbelt, Ford technicians take the same type of care. I suppose that it's a matter of pride and I have to say the technicians involved do a great job.

Today, for example, Ford has issued a rather non-controversial, vehicle safety recall. It's simple. On some of its full-sized Expedition SUVs, the front passenger seatbelt tension sensor sometimes shows a malfunction.

Most of the time, the front seatbelt and its sensor wait for someone to sit in the seat, and then it reacts. When no one is in the seat, it registers an off condition. You can check this out if you look at the instrument panel display. Somewhere along the top of your dash panel – it may be mixed in – you should find the sensor display. It's hard to miss. So, what is the problem?

Let's look at the recall so you can see what it is all about. The recall covers only a total of 1,368 SUVs. This recall is neither the largest nor the smallest in Ford history.

Specifically, the manufacturer issued the recalled because the seatbelt tension sensor for the front seat, located in the seatbelt buckle, may malfunction. The sensor is the device that tells the passenger seatbelt how big the person is that may be using it.

For example, let's say a small person without much heft buckles into the passenger seat, and the sensor mistakenly identifies the person as someone much larger. That misclassification and have unfortunate consequences as the passenger take-up could be delayed by milliseconds leaving the person vulnerable to injuries.

Looking at the reverse situation, let's say larger person buckles into the front passenger seat with the sensor reading the occupant as a small person. In this situation, the belt take-up may be much quicker than usual, causing the larger passenger lots of discomfort.

Further, in some instances, the malfunction may not be detected at all, and the airbag light may not light, indicating that it is off, not protecting at all. It isn't a safe situation.

The problem with the tension sensor the issue could result in injury to the front-seat passenger. Fortunately, Ford has not had any reports of any accidents or injuries related to this condition.

To remedy this issue, dealers will replace the front passenger seat belt buckle. The Expeditions were built at the Kentucky Truck Plant from Nov. 27 to Dec. 7, 2019. The SUVs include 1,355 in the U.S., 12 in Canada, one in Mexico.

The Ford Reference Number is 20S17.