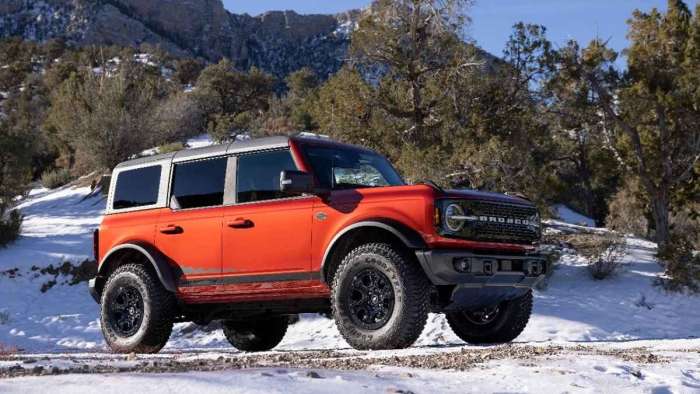 Ford Bronco Customers Spend Up To $1,700 On Accessories

When Ford started selling the Bronco about a year ago, no one knew how popular it would become. Indeed, they have become popular as customers spend about double the amount other buyers spend on Ford's popular F-150 line.
Advertisement

If there's one thing that's true about the Ford Bronco, owners love to buy things to personalize them. Indeed, in the year or more since they went on sale, buyers have added many items that aren't on the standard order sheet.

According to a recent Automotive News article, some Bronco buyers spend lots of cash outfitting their SUVs for things like off-roading. For example, at one dealership in the Las Vegas area, some buyers have added $4,000 to $5,000 worth of add-on equipment. Among the favorite items were things like light bars and tube doors. The dealership has sold about 700 Broncos in the time it has been on the market.

On average, most buyers spend less on accessorizing their Broncos than the off-roading crowd in Las Vegas. According to Ford, the Bronco is now the automaker's "most accessorized product." On average, Bronco buyers are spending $1,700 on accessories for their SUVs. That figure is across 240 parts in the Ford Performance catalog.

The most popular add-ons have included modular front bumpers, winches, off-road lights, and the accessories identified by the Las Vegas dealer. Other accessories available for those who want to personalize their Broncos include roof-mounted tents for camping weekends, tires and racks, tables, and other specialized items that help make their Broncos special. Indeed, some Bronco buyers upfit their SUVs with things like unique storage drawers and such.

A Ford marketing maven shared with Automotive News that the Bronco brand is lucrative for the automaker. For example, if you look at the automaker's various profit centers – pickups, SUVs, and the like – you will find that one of the automaker's other popular vehicles, the F-150 pickup, generates about $800 in accessory sales. According to the trade paper's story discussing accessory sales, the Bronco Sport – front- or all-wheel-drive, unibody construction – generates about the same base additional revenue on accessories. On the one hand, the small Bronco generates about half the amount of money generated by the full-sized Bronco model.
Broncos Profitable Addition As Customers Spend Up To $1,700 On Accessories
Mark Grueber, Ford's U.S. consumer marketing manager, says, "It's the core to the success of Bronco … For dealers, it's a great opportunity not only from a profit standpoint but also long-term management with customers. It's a great proof of what Ford can do, how this opportunity, and how ample it is going forward.
To prove this point, the Las Vegas dealer that the trade paper quoted, Steve Olliges of Team Ford, enthused that in the year that Broncos have been on sale, his dealership has sold about 700 Broncos. The dealer says he cannot remember another Ford product that presented the SUV's opportunities. His enthusiasm for the Bronco brand has meant that the auto dealer has invested about $10 million in an accessory shop about a mile from the main showroom where they will sell Broncos and accessories. So, what's the name of the new addition? It's the Bronco Barn, of course.