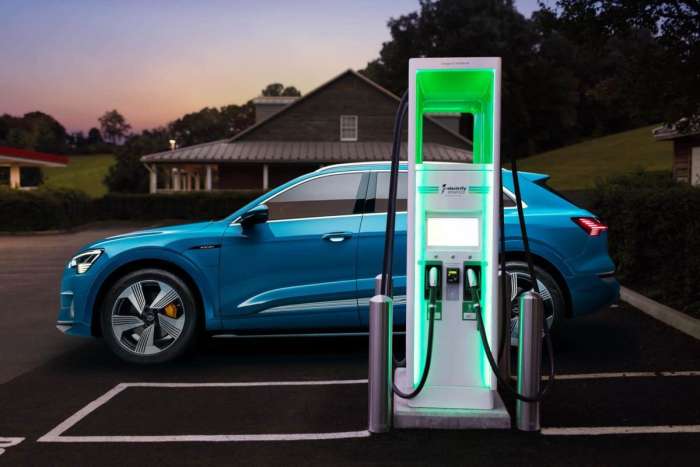 In a surprising development that will help spread an electric charging network even more quickly, Audi and Electrify America will work to establish a charging network for the E-Tron, Audi's first EV.
Advertisement

As Dieselgate wound down one of the results was Volkswagen’s commitment to providing a nationwide network of electric vehicle charging stations.

Indeed, the automaker, as part of its settlement of the diesel emissions scandal, committed $2 billion to provide for infrastructure growth over 10 years. Late last week, at the debut of Audi’s first fully electric vehicle, the E-Tron, an agreement was announced between Audi of America and Electrify America, a VW subsidiary so that E-Tron owners will have a nationwide charging plan.

Audi’s Timing Must Be Perfect

“The arrival of the E-Tron is timed perfectly with a 10-year, $2 billion investment being made n this country’s charging infrastructure by Electrify America,” Scott Keogh, president of Audi of America, said of the agreement. Electrify America has been aggressively adding charging stations across the country. Volkswagen set up Electrify America as an independent subsidiary as

"For charging on the go, the e-tron will be supported by a nationwide charging network,” Keogh continued. In identifying hard metrics backing up the Electrify plan, Keogh noted that “owners will receive 1,000 kilowatt-hours of charging at Electrify America sites over four years,” Keogh said.

Next year, Electrify America’s network will include nearly 500 fast-charge sites either completed or under development. The sites are in 40 states and 17 metro areas. California, alone, has at least 160 ultra-fast charging locations.

As the network snakes its way across the country, like the tendrils of a charging plant, users will find more than 2,000 chargers placed, on average, 70 miles apart on the nation’s highways.
The charging sites will provide up to 150 kilowatts so that the E-Tron’s 95-kilowatt-hour battery can charge quickly. It will take about half-an-hour for the E-Tron’s battery to reach 80 percent.

Charging Sites Will Be About 70 Miles Apart

Over 2,000 chargers will be located on average 70 miles apart on highways across the country, providing up to 150 kilowatts to charge the e-tron's 95 kilowatt-hour battery that can reach an approximate 80 percent charge in about 30 minutes.

DeanMcManis wrote on September 21, 2018 - 8:02pm Permalink
Having convenient charging stations is a smart move by VW. Of course this network is not being developed for the E-Tron alone, but for all VW, Audi and Porsche models, as well as any other EVs that have a compatible plug. As Tesla demonstrated with the Supercharger network, one of the outstanding concerns of the 99% of the people out there who don't own EVs, is running out of energy. Hybrids, and Plug in hybrid EVs have been the first working solutions to this problem, but having public fast chargers all over will ease people's EV range concerns as long as they have compatible charge plugs, and they don't over price the charging service beyond the cost of gasoline.