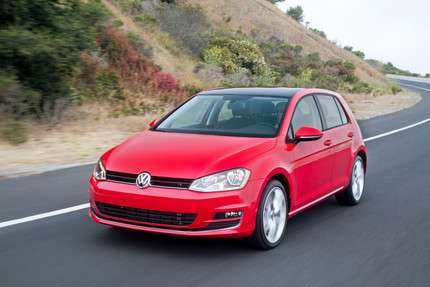 Volkswagen, the Justice Department and Federal Trade Commission Friday asked federal court to approve the final settlement of the Dieselgate scandal. Approval is the next step needed so owners can receive their buyback payments.
Advertisement

Following months of waiting, it looks as if Volkswagen may soon be paying out the billions it has set aside for consumers in the Dieselgate emissions scandal. The Justice Department, Federal Trade Commission and attorneys involved in the class action suit against the automaker filed paperwork late Friday seeking final approval for buybacks of up to 475,000 emissions-cheating diesel cars.

U.S. District Court Judge Charles Breyer has scheduled a hearing on Oct. 18 where he will decide whether or not to grant final approval of the Dieselgate buyback plan that was negotiated earlier this year and announced in June.

After months of intense negotiations aimed at settling a class-action lawsuit, VW agreed to spend up to $10.03 billion to buy back 475,000 vehicles equipped with 2.0-liter four-cylinder EA189 diesel engines. So far, 311,000 diesel owners have registered to participate in the settlement, Automotive News said. Only 3,300 have decided not to take part.

The buyback is only one part of the settlement. VW also offered to fix the diesels of owners who would like to have them repaired. Those repairs are not likely to occur soon as the automaker, and federal officials are still seeking to resolve repair issues and find fixes that are acceptable to regulators.

In a separate filing, Volkswagen announced that it would not offer diesel vehicles for sale during the 2016 and 2017 model years. Volkswagen has been banned from selling diesels since Dieselgate went public a year ago. The ban ended VW diesel sales for the 2015 year, as well. In court papers filed earlier this month, Volkswagen said it did not know whether it sell diesels in the U.S. again.

In another action, Volkswagen AG said it has agreed to pay $1.21 billion to 652 VW dealers as part of the $16.5 billion settlement package. Each dealer will receive about $1.85 million over 18 months. The agreement was announced in principal in August. The court must still approve the payouts. As part of the dealer plan, VW agreed to:

Meantime, the automaker is still in talks with regulators on a separate, but related issue. At the same time that VW admitted it had cheated on emissions from its 2.0-liter engine, it said that the 3.0-liter V-6, used in 85,000 vehicles, also cheated. The Justice Department said Friday that negotiators are still seeking “a technical solution that reduces the emissions of these vehicles.” If they cannot find a fix, the automaker may be forced to implement an expensive buyback program for the larger engines. And, the automaker still faces civil and criminal penalties for emission law violations.

And, Reuters reported Friday that Volkswagen and Justice negotiators have been working to settle a criminal investigation that has been ongoing since Dieselgate became public. The Justice Department, in its court filing, said it would continue to hold the automaker accountable for emissions law violations.

While the buyback plan has received most of the attention in the run-up to the Oct. 18 court hearing, there are other parts of the settlement that are important. For example, VW has agreed to spend up to $5.3 billion to handle the claims of federal regulators and 44 states.

Under the deal, VW has agreed to spend $2 billion over 10 years to:

Also, VW will pay $2.7 billion over three years to help replace old buses for the government and tribal agencies; pay to build an infrastructure to cut diesel emissions, and give states about $600 million in awards.

Justice has said it has received nearly 1,200 comments on the proposed consent decree. However, the department said it would only make minor technical tweaks to the plan.

Dieselgate is Volkswagen’s self-inflicted emissions scandal. The automaker admitted it installed software that gamed emissions testing in 11 million vehicles worldwide, the heart of the scandal.