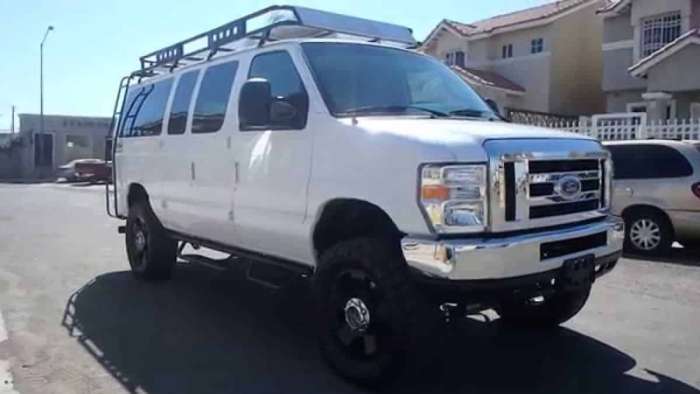 A West Virginia Ford dealership continues to offer is $10,000 reward for information about a stolen E350 box van and a set of 2019 Ford F350 Super Duty wheels and tires. The theft occurred about a week ago early in the morning.
Advertisement

Police are still seeking the thieves who stole a 2008 Ford E350 van and a full set of wheels and tires off a 2019 Ford F250 Super Duty truck last week in West Virginia. Jenkins Ford was the dealership that experienced the van and wheel/tire thefts.

Jenkins, quite naturally peeved about the thefts, has offered a $10,000 reward for information about the robbery if that info results in the arrest of the car thief or thieves who took the van and the wheels and tires.

According to West Virginia State Police, the thefts happened sometime early on Nov. 30. To date, the staties have made no arrests, and the property is still in the wind, according to Cpl. V.J. Pyles, a trooper with the Buckhannon detachment of the State Police.

According to authorities, the thefts happened sometime between 3 and 6 a.m. The truck thieves stole the van first. After boosting the van, the thieves returned and took the wheel/tire combos off the truck. The truck thieves used the truck’s jack and tire tools to remove the wheels. They left the F350 Super Duty pickup sitting on stones after they had finished. And, for whatever reason, they also broke out the truck’s windows as well.

When employees arrived in the morning and opened the dealership, employees found the first items stolen were the wheel/tire setups. As they continued to canvas the site, employees then discovered the van was gone.

The thieves gained access to the truck by smashing the small key safe off the van’s window with a hammer. When they had the keys in hand, they drove the box van away, returning later on to pull the wheel/tire theft.

Jenkins is still offering the $10,000 reward to anyone with information about the theft. If you have further information that might help, you can call Cpl. Pyles at the West Virginia State Police at 304-473-4200.

Recently, The Ford Authority published a story about Ford trucks being the most stolen in Canada. From the looks of this particular theft, not only F-Series pickups but also vans are sought by thieves in the U.S.

Marie wrote on December 9, 2019 - 10:23am Permalink
Did the police or dealer provide the plate or vin# ? Would like to help.....
Marc Stern wrote on December 11, 2019 - 10:07am Permalink
I would assume they did as it is part of most police reports. When we had vehicles either damaged or stolen from our dealership a long time ago, it was part of the information that was recroded.