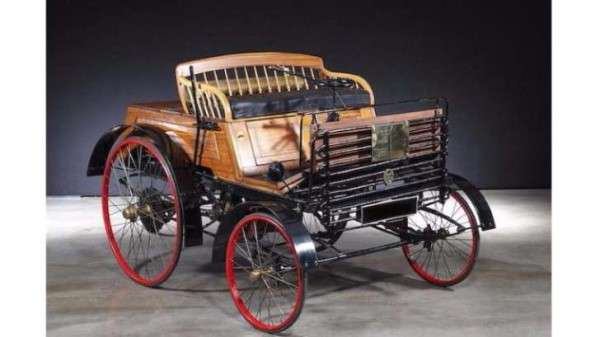 Busted: vet car up for auction has bogus engine

There's an original Santler that is scheduled to be auctioned next week that may not be all there. The model, an 1894, is said to be the oldest car manufacturered in the U.K. Though its authenticity, down to the manufacture date, has been determined, it may not be a total original. Santlers were either steam-powered or powered by rather weak compressed coal gas engines. Instead, this one has a one-cylinder gasoline-powered Benz powerplant, dropped in when it was restored half-a-century ago.
Advertisement

One of my longtime favorite past-times has been writing about – and sometimes debunking – longtime veteran cars. A veteran car is one that dates from the earliest days of motoring. For instance, if you were to have a three-wheeled Daimler tricycle car in your garage, then you would have a priceless vehicle as there were only two or three built in 1887. That is 130 years ago when the first three-wheelers were running on the streets of Stuttgart, Germany, beginning the current automobile era.

What makes a marque priceless?

What makes such a marque priceless? The answer is simple: any versions of the vehicle should be as close to physically correct as possible. By that I mean, it should have the original engine or, perhaps, one from old factory stock or one built according to the specs provided for the vehicle. It should also include the parts that are as original as possible, like the seats, steering wheel or tiller, brakes, magneto, spark, carburetion system, brakes and the like.

Therefore, it was interesting when I read about an upcoming auction at Bonhams in the United Kingdom. The auction house says Autoblog, “is set to sell what is believed to be the oldest surviving British motorcar.” The model in question is an 1894 Santler Dogcart.

For the most part, the Santler seems like the real thing: it includes the original varnished wood body as well as its angle-iron platform and full elliptic front and rear suspension (a first for that era). It also features an original leather belt-based transmission that powered its bicycle tires. The Santler used dual braking systems – foot and hand. Dual braking systems, foot- and hand-operated, were somewhat advanced for 1894 where you were more likely to find brakes that resembled those found on horse-drawn heavy dray wagons.

The well-cared-for machine was reportedly rediscovered in the 1930s and survived the ravages of the Luftwaffe in World War II intact. It was restored carefully in the 1950s. At that time, the decision was made to use a single-cylinder, water-cooled 3.5-horsepower Benz engine, rather than a copy of the original powerplant or another powerplant that may have been used by the automaker. This means that though the manufacture date has been verified by the VCC (Veteran Car Club), the Santler Dogcart is not wholly original. The original version of this vehicle probably used a weak compressed coal gas engine. Coal gas was a low-energy source, and though compressed, engines that used it were weak with limited range.

Vertical steam boilers powered early Santlers. They also were required, in the 1890s, to be crewed by a three-member crew to comply with an 1865 law requiring the manning.

The Santler factory built them between 1889 and 1922 in Malvern Link, Worcestershire, England. Brother Charles and Walter Santler were the proprietors of the business started by their father.

At first, they concentrated on bicycles as many carmakers of that era did, later moving into automotive production. Their father’s business was in engineering.

There is little documentation for this model as the documents were lost to history. Interestingly, there was an apparent faux pas on the original manufacture date. Though the VCC determined the date, they also found the manufacture identification number was apparently reused as it also has been linked to another Santler made in 1901.

This is not the first time this vehicle has been up for auction. About 16 years ago, Christie’s, another venerable British auction house like Bonham’s, auctioned the same car for 146,750 pounds.