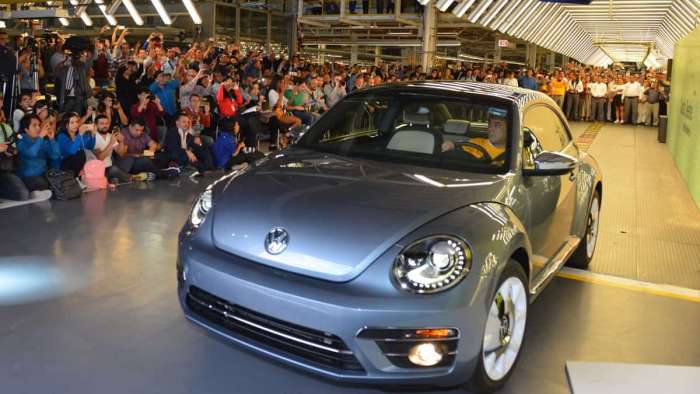 With three finishing models, the VW Beetle has ended its impressive run of nearly 70 years.
Advertisement

With the push of an assembly line button at Volkswagen’s Puebla manufacturing plant, the final VW Beetle rolled into history, a Stonewashed Blue couple that is now in the automaker’s local museum.

“It’s impossible to imagine where Volkswagen would be without the Beetle,” Scott Keogh, president and chief exec of the VW Group of America, said. “From its first import, in 1949 to today’s retro-inspired design, it has showcased our company’s ability to fit round pegs into [the] square holes of the automotive industry. While its time has come, the role it has played in the evolution of our brand will be forever cherished.”

When it was introduced here in 1949, it was known as the Type 1. The Type 1 went on to sell nearly five million copies in the U.S. Worldwide sales were 21.5 million vehicles. The Type 1 was to set what we came to call the imported car segment. At that time, VW was the leader of the imported car market. The VW Type 1 inspired Renault to sell here, as well as Peugeot, Alfa-Romeo, and others. Sales of Type 1 stopped in the U.S., in the early 1980s. However, the Beetle Type 1 continued to sell in South America, Europe, and Asia.

About 15 years later, in 1998, to be exact, Volkswagen reintroduced the New Beetle. It was a modern interpretation of the “modern retro” design language. A new generation of buyers saw the familiar silhouette, and they bought 1.2 million copies of the New Beetle between 1998 and 2012. It was the second generation

Introduced to America as the Type 1, Volkswagen sold nearly five million Beetles in the United States and a worldwide total of 21.5 million cars. In 1998, the New Beetle—an early automotive adopter of “modern retro” design language—re-introduced the familiar silhouette to a new generation of drivers, and sold more than 1.2 million cars between 1998 and 2010. In 2011, the third, and the third and final Beetle generation went on sale in the U.S. as a 2012 model, generating sales of more than 500,000 Beetles.

Since the day the assembly lines began humming as they turned out second- and third-generation Beetles, the brand has had some interesting results. For instance, VW has:

With the final copies of the Beetle finished, VW now plans to reallocate the resources of the plant to produce a new compact SUV/crossover, tailored to the North American market. It will be slotted just below the Tiguan in the U.S.

Volkswagen also identified the final cars built for the U.S., a pair of Kings Red vehicles with customer dashes and quilted seats. They will be members of the automaker’s collection of historic vehicles.

DeanMcManis wrote on July 12, 2019 - 12:29pm Permalink
I see this as part of the general move away from coupes, sedans, and sports cars to CUVs and SUVs that automakers are doing now. For me it is unfortunate, and the Beetle is the latest in a long line of good cars lost in this trend. But like the Camaro, the Beetle/Bug has been killed off before and come back. So I suspect that the Beetle will return again in a few years as the Newer New Beetle, probably being electric. I own a '59 Karmann Ghia convertible, where VW put a sports car body on a VW Bug drivetrain/pan, and it has been a very fun car over the years. So we can say goodbye again to the iconic VW Bug/Beetle and hope that someday soon the marketing trends turn around and herald it's return as the latest thing since sliced bratwurst.
Marc Stern wrote on July 13, 2019 - 11:58am Permalink
All good points. I remember "The Thing" from the 1970s, owned by a great-uncle-in-law that he and his wife drove all over the place and loved. It was his "summer car." And, you are right, I think VW will bring the Bug back, in several years, as an EV. Look at the I.D. Buzz MPV. If you look at it in any light and from any angle, you will see the old VW MicroBus looking back at you. I have also read comments from, I believe, Diess or Keogh, that hinted the Bug would be back in the future, so all isn't lost. BTW, I loved the Karmann Ghia Body. Now, I don't know if it was real or not, but I always felt the Karmann handled much better than the old Type 1 VW Beetle. I first met the VW through my younger brother when he was at college and I was just getting into my career way back before the dawn of fire (1960s). And,you are right also about the greeing the New New Beetle might be given.
DeanMcManis wrote on July 13, 2019 - 10:11pm Permalink
I've owned 3 VW Busses. A '66, '64, and '57 panel bus. VW has had a few retro VW bus concepts over the years, but now with their upcoming MEB BEV (electric drivetrain) platform it looks as if the I.D. Buzz will actually be built. Which is good news to me. As a little bit of trivia the Karmann Ghia was a collaboration between the Karmann factory in Germany, who specialized in building convertibles and custom car bodies, and Carrozzeria Ghia, an Italian design studio, who also designed and built custom cars. In the early 50s Chrysler contracted Ghia to design specialty Chrysler Ghia "dream cars" for the show circuit, with a hope that they would attract interest in Chrysler and hopefully be put into production. One of Chrysler's designers who worked with Ghia was Virgil Exner, and elements of his one-off 1953 Chrysler D’Elegance car were merged into VW's sporty Karmann Ghia, which ended up selling over 445,000 cars from 1955-1974. I've always thought that it would be cool to have a modern Karmann Ghia, and perhaps VW might build an electric one someday if sports cars make a comeback.