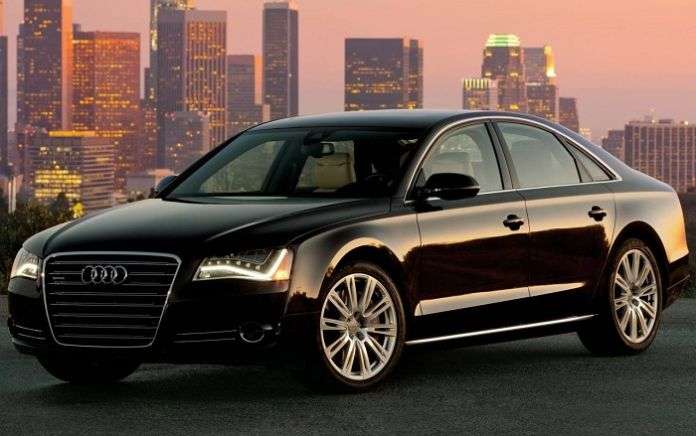 Audi may recall up to 850,000 Audi diesels -- and up to 5,000 German A8 luxury models -- in the continuing diesel emissions scandal. While it is largely complete in the United States, the scandal investigations are continuing in Europe where the scandal is anything but over.
Advertisement

Though the Dieselgate scandal has been put to bed in the U.S., in Europe, it is another story. The automaker’s self-inflicted scandal is very much alive and well and moving along. For example, Audi reported Thursday that Germany’s transport watchdog, KBA, is checking nitrous oxide (NOx) emissions from Audi’s flagship A8 sedan to determine whether there was any emissions manipulation. Audi may recall up to 850,000 diesels in ongoing emissions probe.

Audi, the Volkswagen Group’s luxury line, has announced the recall of A8 models, equipped with the automaker’s 2.4-liter V-8 diesel engine. The automaker said that its luxury sedans need a software update because the engines emitted too much NOx. Reuters reported that Audi told Germany’s KBA about the matter. According to an Audi spokesman, KBA picked up the ball and ran with it. The agency has reportedly been looking at illegal emissions manipulation.

“Among other things, the update should ensure that after cold starts the engine more quickly reaches optimal operating conditions for the exhaust-gas treatment system so that its emissions are improved in real driving conditions,” Audi told Reuters. “During the testing, it will be ensured that the new software has no disadvantages for customers in terms of fuel consumption or performance.”

According to the automaker, they built the affected cars between September 2013 and August 2017. The automaker will make the fix when the software update is available sometime in the first quarter of 2018.

Press reports indicate that Audi has been probing its diesel engines for emissions manipulation. The investigation has been going on for the last year. In July, the automaker said it planned to recall up to 850,000 six- and eight-cylinder diesels for a software update. Porsche and Volkswagen, whose vehicles employed the same Euro 5 and Euro 6 types of diesel engines, have had the opportunity to take advantage of the opportunity. As many as 11.5 million Volkswagen Group vehicles have been affected by the emissions scandal.

Scandal has so far cost VW Group over $25 billion

The software update arose from the so-called Dieselgate scandal which has so far cost Volkswagen more than $25 billion in fines and penalties in the United States. In the U.S., 600,000 2.0-liter and 3.0-liter turbodiesels manipulated emissions to pass NOx testing. The 2.0-liter four-cylinder engines emitted up to 40 times the allowable emissions, while the 3.0-liter V-6 turbodiesels emitted about nine times the permissible limits. The fours used a software defeat switch to turn the emissions system on and off, while the sixes used a variation of the same software defeat switch.

While several Audi models are among the cars, involved in the scandal, the automaker and its parent, the Volkswagen Group, have not commented on the matter. The models tied to the scandal reportedly have been using software defeat

Ndili Mbuli wrote on December 18, 2017 - 11:02am Permalink
Hi, has Audi said anything about this defeat device for cars in South Africa? I have not heard anything about a recall to fix this and my car is an Audi Q7 3.0.TDi 2012 model. Is this device not the diesel particulate filter? Regards, Ndili Mbuli