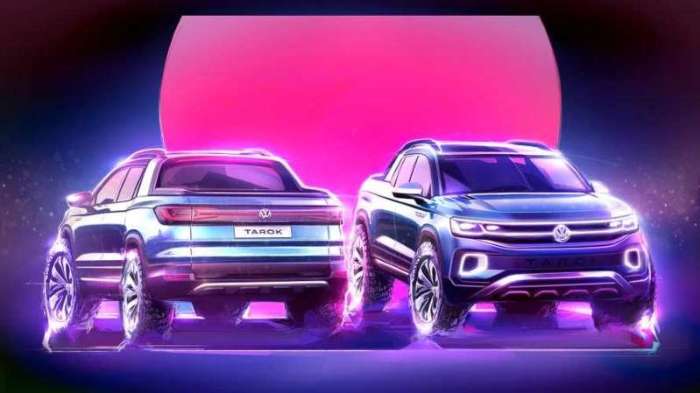 After more than a year's worth of denials that there would be no pickup heading to the U.S., things have changed at the automaker. Herbert Diess, chief exec of the automaker, hinted in an interview that there very well could be a pickup for the U.S., if talks with Ford work out.
Advertisement

Even though they might be competitive in the United States, two Volkswagen pickups will never make it here – at least this year, anyway – the Amarok and the Tarok. The intermediate-sized, diesel-powered Amarok is sold by European dealers, while the Tarok, a newly introduced model, built on VW’s omnipresent MQB platform, is slated to sell in Latin America. Its market may expand in the future, but it will still be south of the border.

A Huge Caveat: Never May Not Be So Long

With that said, there is a huge caveat that we at Torque News have to put on the word “never,” at least as regards the Amarok. Herbert Diess, chief exec of the automaker, had a wide-ranging with Automotive News, the auto industry’s top trade paper, in which he said that the Amarok might be the basis of a pickup for the U.S. market.

In the interview, he told the trade paper that a platform, probably based on the unibody Amarok, could be headed toward the U.S. market if talks between VW and Ford result in an agreement to develop a pickup jointly.

The World Is Changing

Volkswagen had previously told Torque News that there was no way the Amarok, or its clone, was headed here. We informed the spokesman that it seemed like the Amarok was a natural fit for the compact pickup market here. At that time, however, the answer was no. It’s funny how a joint agreement with another automaker whose strengths lie elsewhere mean that today’s no is tomorrow’s yes.

But, it still could be no if there is no progress on talks between VW and Ford. If things go well, Diess said, and there is an agreement then the automaking pair will build a jointly developed pickup that “would be then appropriate for sales worldwide,” including the U.S.

Diess continued that the automaker is looking at unibody pickups that would sell in the U.S., but, he also admitted that it would be a risky move for the automaker. Indeed, that was very similar to the statement that was made to Torque News our story last year. The company spokesperson cited the risk as a critical consideration in keeping the Amarok from this market. One other concern, of course, is the fact that the Amarok is a turbodiesel. Diesel is still a hot-button word at VW which suffered considerable losses in the Dieselgate scandal. To date, the damage is somewhere around $26 billion and climbing.

Some Interesting Hints From Sao Paolo

MSN Autos, in a story on the Sao Paolo introduction of the Tarok Monday, hinted that the unibodied pickup was all set for production with “barely any changes.” Further, it suggested, that once VW launched the compact pickup via VW do Brasil that it could end up in other countries as well, something that Torque News also noted in its story on the introduction last week.

MSN Autos implied that Tarok could end up on sale in the U.S. market, though, VW’s denial was still firm. Still, given the nature of the truck market and the potential business that could be generated by a Tarok-like truck (or Amarok), it still might end up here because one never knows about it.

Moving along, Diess noted that pickups represent “a very American segment.” However, the company’s existing products can be tailored to the U.S. market, quite easily. Diess believes that VW “has the toolbox to satisfy America.”

As to other thoughts, Diess noted: