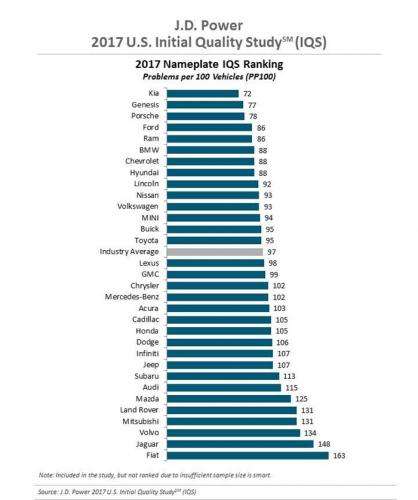 Volkswagen was one of two automakers to have brands rated in the top 14 of the annual J.D. Power Initial Quality Study. Using a large base of 80,000 vehicles, the study rates new-car quality in eight important areas.
Advertisement

Although Kia has managed to come out on top of the J.D. Power Initial Quality Study, two other automakers have had multiple brands that they sell in the top 14, as well. The Volkswagen Group’s Porsche subsidiary was among the top finishers as were Volkswagen-branded vehicles. The other automaker to place two divisions in the IQS top 14 is General Motors.

According to thecarconnection.com, the IQS is best for new-car buyers. Analogous to the Dependability Study, the key difference is that the Dependability study looks at cars over a period of years, while the IQS rates vehicles on the problems owners experience during the first three months of ownership. Here is a more in-depth look at the numbers.

This year’s study used a large sampling – 80,000 new-car buyers. They had purchased 2017 model-year vehicles and then had answered a total number of 233 questions, divided into eight problem areas:

Tracking the number of problems owners had in each of those areas, the study’s authors then averaged the numbers to determine problems per 100 vehicles (PP100, in shorthand). These numbers tell an interesting story; what type of shape cars are in as they roll off the assembly line.

Kia Does The Incredible, almost unimaginable

While Kia did the amazing – almost unbelievable – of repeating last year’s number one rating (luxury brands usually dominate this study) and Genesis was a relatively close number two, Porsche was hot on Genesis’ heals. In 11th place, the Volkswagen brand was among the lucky top 14.