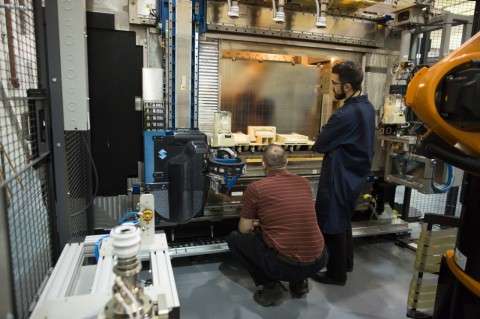 Why your next Ford Mustang custom spoiler may be made on a 3D printer.

Ford is experimenting with making custom performance auto parts on a huge 3D printer. The technology would let the automaker produce custom parts that are more lightweight and ultimately cheaper.
Advertisement

Ford Motor is experimenting with a 3D printer, the size of a room, to see how well it produces custom auto parts. The gigantic printer is the Stratasys Infinite Build 3D printer.

Ford says in a release that the printer is capable of producing large-scale one-piece parts like spoilers. Ford says the huge printer could be a breakthrough for vehicle manufacturing, because it could provide a more affordable way to create parts for low-volume vehicles such as Ford Performance products.

Ellen Lee, a technical leader in Ford’s manufacturing research, says in a statement. “With Infinite Build technology, we can print large tools, fixtures and components, making us more nimble in design iterations.”

Ford says 3D printing could help it make parts that are lighter and lead to better fuel efficiency. Ford estimates that a 3D-printer spoiler could weigh “less than half its cast metal counterpart.”

3D printing could also help automakers produce vehicles as well as custom parts much faster. Right now, engineers create computer models of a part, but they have to wait months for actual prototypes to be produced. A 3D printer could take the measurements and produce the part in a matter of days. Similarly, the technology would make it much quicker and cheaper to produce low volume parts for customers or for prototype vehicles. They could produce special components for the race car programs, without waiting months for special tooling or expensive low-volume production runs.

The printers are perfect for parts that are unique or highly personalized. The printer can operate unattended for hours and even days. It can be programmed to reload its own supply stock, requiring very little oversight from engineers.

Ford is the first automaker to experiment with the gigantic 3D Infinite Build printer. While they are currently testing its ability to produce larger one-piece auto parts, eventually they could use the printer to produce tools or fixtures. Other industries like aerospace and medicine are also testing out the huge printers to see if they can produce parts and components more cost effectively.

The 3D printers are not cost effective for high volume production, but they may change the future of customs, forever!