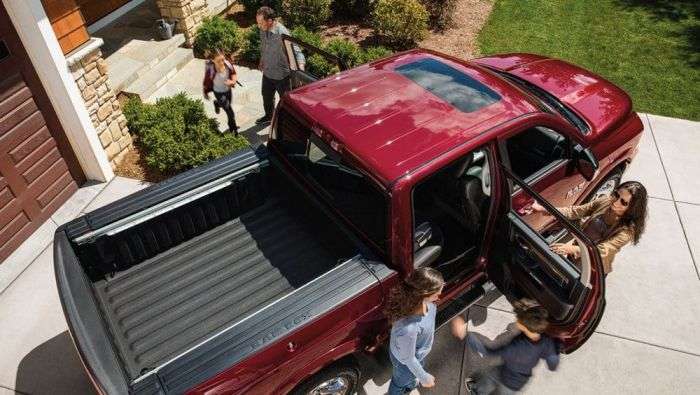 It is a question often debated by truck owners, should you install a bed mat or go with a spray in liner? One owner of a 2017 Ram 1500 reached out and received lots of input.
Advertisement

Mahoney has a question about what he should do with his 2017 Ram 1500 in Northern California. “I’m thinking of getting a bed mat for my truck. What do you have? I’m leaning towards the Mopar one. My question is how do these stick to the tailgate?”

Mason, from Washington, was first to chime in. “I have the Mopar bed mat. It did come with a tailgate cover, but even the parts guy and service manager did not know how to install it to the tailgate.” You hear that a lot. The bed mats can be awkward and often have to be drilled into the tailgate to work as designed.

Canoe agrees. “I believe you have to drill into the tailgate and use provided screws to attach it.”

Mahoney doesn’t like the idea of drilling it in, either. “I just searched and found someone installed one and apparently you have to drill 16 1/8” holes onto the bed to hold it on. That doesn’t thrill me. Maybe I’ll go Westin or Dee Zee with no tailgate mat.”

Addison has a bed mat and loves it. “I went with the Dee Zee bed mat only. I absolutely love it! It fits perfect, is thick rubber, and the bottom has small rubber pegs that keep it from moving.” The nicest thing about them is that they protect your knees when you are working in the truck bed, you aren’t kneeling on hard metal.

JB likes his. “I went with the bedrug impact mat, its a texture finished but has padding underneath, nothing slides around and it fastens with Velcro.”

Scott, from Florida, has been pleased with his. “I went with the Westin bed mat, a lot easier on the knees than the spray in bed liner and nothing slides around on it, but it is only for the bed, not the tailgate.”

There is a pretty big range in price depending on what mats you look at. Some start about $75, but they can run over $200, depending on the manufacturer and the size of the truck.

Some Have Both the Bed Liner and the Mat

TMA really likes the idea of a bed mat. “I went with the dee zee bed mat, the spray in liners are slick especially when they get wet. The mat fits perfect and nothing slides around on it. It doesn't have a tailgate piece and I wouldn't want to drill holes in my tailgate to mount one either.”

Mahoney says that is exactly how he feels about the situation. “I just want something to keep everything from sliding around. And some protection on the tailgate from sliding things in. But I don’t really want to drill holes in anything.”
Sane likes his set up. “I went with the DualLiner. It is a thick rubber mat that mates up with plastic side and front pieces to protect the side walls. It also has a plastic tailgate protector that attaches with the existing screws in the tailgate.”

A Ram owner, from Pennsylvania, really like the Mopar one, and says it wasn’t that expensive. “I have the Mopar one (part no 8212996AB) and like it. The tail gate mat does screw to the gate, took about 10 minutes to install and have had no issues for over a year now. The mat itself is pretty thick, and is very slip resistant (almost too much actually) and adds some sound deadening to the bed when empty. Got mine from local dealer for $129.”

Mason paid a lot for his and is now disappointed to learn that other better ones may be cheaper. “I didn't drill any holes in the bed. The mat just lays back there. I mostly wanted it for when I'm throwing rounds of wood or rocks/bricks in the back. I like its material, thickness, and feels quality. But I'll admit, I probably paid way too much for it for what it is.”

Several of the posters went with Bedrug, like Chris. “I have a BedRug waiting to go in...sitting in my living room right now, my kids love it because it’s so comfortable lol.”

Kilo decided to go with both the spray liner and the mat. “I have the factory spray in bedliner in my truck, but I put a mat in when I had a generator running in the back during a Christmas parade I was in. I don't think the factory bedliner is all that durable, so I wanted some extra cover. I put a simple mat from ABC Auto (parts store in TX), and I think I paid approximately $90 for it. It is a perfect fit, and I actually love it. If I mess up the mat, I'll simply put another one back there.”

Tide says “I have the Deezee rubber mat in mine and the Weathertech tailgate cover. The bed mat just lays in there and someone asked how it was secured I think? Trust me I've owned many trucks with bedmats and never had one blow out or even move that I've ever noticed at speeds in excess of 100 MPH. The Weathertech tailgate cover is held in place by existing screws in the tailgate so no drilling required. The only thing I don't like about it is that it tends to stick up in places when it’s hot outside.”

Neon, from Wisconsin says he has found a way around drilling holes in the tailgate. “For the tailgate, no need to drill holes!!! Holes will rust. I used Velcro tape. Almost impossible to remove if you go all around.”

Betty14 says “Deezee bed mat. $60 shipped a few years ago. Best investment ever for the bed. Heavy, grippy and fit perfect. I ran it on my 14 with the spray in liner and now on top of my 18 with a bedrug and Love it. I have had gas, tranny fluid and all types of [email protected]#% on it and it’s fine.”

Mahoney finally made his decision and got a great price. “I ended up getting the bed rug impact mat. Found it on eBay and after a little bit of haggling I got it for $165.”

At least, Mahoney got a lot of input before making his decision. The members of the forum were certainly able to help him know the range of prices, and the benefits of the different styles.