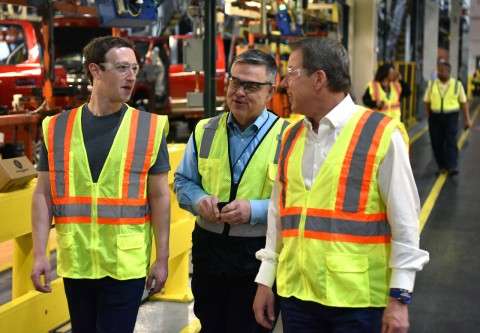 The Facebook founder dropped in to the home of the popular Ford F-150 to learn about automotive production and even took a ride in an autonomous Ford Fusion.
Advertisement

Politicians and other special guests are known to show up in assembly plants, but the new person working on the Ford F-150 line really turned heads. Facebook founder Mark Zuckerberg put on a work vest and joined employees on the line at the Dearborn Truck plant, in Dearborn, Michigan.

Ford released a statement saying that Zuckerberg was visiting as part of his “Personal Year of Travel Challenge” to get out and talk to more people about how they're living, working and thinking about the future. He saw the best of what Ford has to offer.

Bill Ford showed Zuckerberg where Ford builds America’s best- selling vehicle, the F-150. Zuckerberg was able to try his hand at some of the assembly work. Zuckerberg was also able to ride in one of Ford’s autonomous vehicles. He was also given a tour of the Production Development Center where engineers work on some of “top secret” future products.

Zuckerberg talked at length about his first trip to Michigan on Facebook and has a message for some very special future 2017 Ford F-150 owners.

Zuckerberg told his followers. “I played a very small part in assembling some new Ford F-150s on the line by adding antennas, cleats and drilling screws. I even signed the inspection sticker on one. You're welcome, future F-150 owner.”

Zuckerberg is one of the world’s richest people after founding the social media site while in college. He seemed particularly interested in the workers that he met. He now seems to understand some of the complexities of working on an assembly line.

Zuckerberg said, “Working on the line at an assembly plant is physically hard, and the people I met talked about how tiring it is and how worn down you get. Each person told me separately how important it is to have good shoes because you're essentially walking on a treadmill for 10 hours a day. Every 52 seconds, you have to go through your set of tasks -- 650 times a day. You have to be perfect, but the biggest challenge is having the focus to do the same thing over and over again. The people I met are so good they keep the line running at full speed and listen to audio books or music in one earbud to stay engaged.”

Few people understand how difficult line work can be and how physically tiring the repetitive motions can be. Zuckerberg seemed impressed by the camaraderie.

“Working at Ford is a long term thing. Most of the workers I met had been at the plant for at least a decade, and a lot of them have kids and friends who work there, too. Someone told me that when you spend 11 hours a day, four days a week together, you end up becoming family and friends outside of work, too.”

Mark Zuckerberg also thanked Bill Ford and all of the workers for showing him around. A trip like this is important because Zuckerberg and his Facebook site have tremendous influence in how people perceive things. If he has a greater understanding and respect for how hard people work, hopefully he will telegraph that to his followers.

If Zuckerberg understands how hard Ford is working on solving mobility issues, hopefully he can impress that on his 89 million followers, as well!