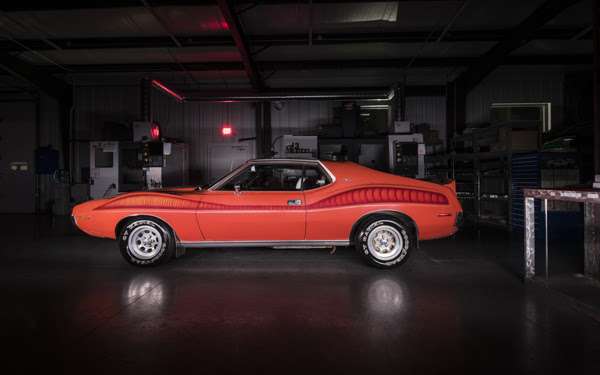 SEMA just wrapped up in Las Vegas, but people are already talking about what may be hits for next year. Ring Brothers are promising to create a show-stopper out of a 1972 AMC Javelin AMX.

The Javelin was AMC’s answer to the Ford Mustang and the Chevrolet Camaro. It started as a pony car but then was beefed up to be a full-blown muscle car and racer. They were built in Kenosha, Wisconsin from 1968-1974. The AMX was the most high-horsepower version.

According to a statement released by Jim and Mike Ring, they have a long history with the 1972 AMC Javelin AMX that they plan to bring back to life. Mike Ring says “We’ve seen this particular car driving around our home town of Plain, Wisconsin since we were kids and we always loved it. The AMX was such a neat car, unlike anything else at that time.” The flashy Javelin AMX must have turned heads in their town of 600 people. The car apparently was known for winning at the nearby race track. On weekends, Mike Ring would wash the car for the owner and he was the last one to perform an oil change on the car before the Rings purchased it from the original owner.

The AMX version of the Javelin was apparently crafted to compete with the Chevrolet Corvette. It had a shorter wheelbase, and available 401 cubic inch engine making 255hp. The second generation AMC Javelin was one of the fastest American cars available for purchase. According to the Ring Brothers, “Because of its sportiness, the Javelin was utilized in dragstrip and Trans-Am Series racing beginning in 1968 and in 1971 and 1972, the Trans Am Racing AMX won back-to-back championships in the Trans-Am Series.”

AMC stood for American Motors Corporation. It was bought out by Chrysler, in 1987. They had other nameplates that you may remember like the Rambler, Pacer and the Gremlin.

Jim and Mike Ring formed a custom car build business called, of all things, Ringbrothers. They still operate in the small town of Spring Green, Wisconsin. They are known world-wide for their craftsmanship in rebuilding American cars.

Richard wrote on November 9, 2016 - 1:36pm Permalink
I'm all for you guys doing the AMX. Hope you keep it AMC power. If you need anything AMC I might be able to connect you to those who make big horsepower.
Mary Conway wrote on November 10, 2016 - 9:45pm Permalink
Hi Richard, You might want to contact Jim and Mike Ring through Ringbrothers.com. They are the ones doing the rebuild. Thanks for offering to help!
Bill furniss wrote on December 6, 2016 - 7:16am Permalink
Hi I'm very excited to see what they do. I'm a proud owner of a 1974amx with 50000original miles they think it was the last one made as it is the only one with the colour code and it has the Transam racing block 360 all from the factory it was made the end of August 1974
Mary Conway wrote on December 10, 2016 - 3:41pm Permalink
Sounds like you have a great car! It will be fun to see how they redo that one!
C.Lange wrote on February 18, 2018 - 12:38pm Permalink
It would be great to see the remake happen I was a proud owner of a 72 Pierre Cardiene Javelin Amx , A 69 bittersweet orange 390 Amx and a 69 yellow 3 on the tree 258 Javelin. I truly loved all of them .My dad worked @ AMC for close to 40 yrs. Loved almost everything they made.....