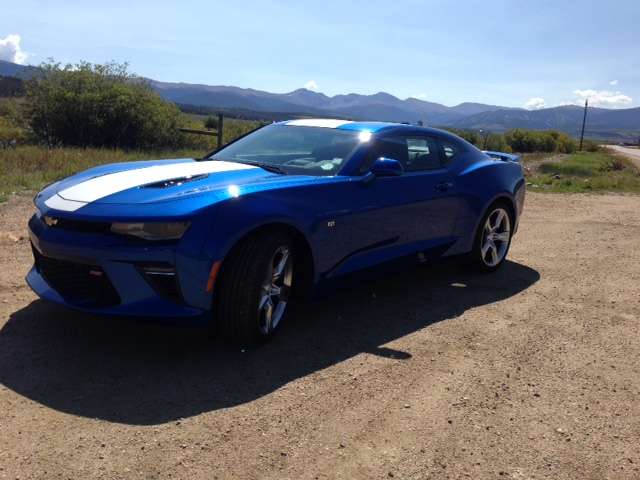 Chevrolet says they have a fix for the mysterious rattle sound coming from the rear of the performance car. However, some owners say the fix hasn't worked and it is driving them crazy.
Advertisement

The driver of a 2017 Chevrolet Camaro 2SS is complaining of a rattling noise in his new ride. Masa, from Canada, says it is unlike anything he has ever experienced before. “There is an audible rattle that at times sounds like metal on metal or a grinding metallic sound on acceleration. It is intermittent and comes from the right rear of the car and sounds like it's coming directly from the right rear tail pipe where the valve is located.”

Masa is furious because he isn’t getting satisfaction from his dealership. “This is a brand new Camaro 2ss with no more than 1500 miles on it. There's no way in hell I'm going to accept a brand new car with a rattling exhaust. I will be contacting GM directly and escalating this. One way or the other it will get fixed or they can take the car back. I did not buy a Camaro to inherit a rattling exhaust. I expect many of you feel the same way.”

If this sounds familiar, it is because countless 2016 Camaro owners had the same issue. Chevrolet thought they had come up with a fix. It involved using epoxy to fasten a ceramic pin that was vibrating in the exhaust system. Masa’s mechanic’s tried that. “He found an issue in his system that had something to do with the ceramic pin and using an epoxy. Unfortunately the fix they put in place did not resolve it.”

Russell, from Peoria, IL, has a 1LT RS and says he has similar problems. “I have this same issue on my RS. It has now been in the shop 5 times to fix it. They have even replaced the door panels. No fix can be figured out and GM has even been notified. They released a bulletin for this issue and it did not work. I am hoping they find the issue because it is constant while driving and even if you try to drown it out by the radio it just makes it worse.”

Andrisek, from Idaho, is similarly frustrated. “I'm having the same "tin can" buzzing sound on the passenger side rear. My 2016 2SS only has 2200 miles on it and I noticed it almost immediately after purchase.”

• The bulletin that was issued last May, only applies to the 2016 Chevrolet Camaro model year

The situation has drivers frustrated and angry. A California driver says, “Got the fix done, my rattle went away. Now it is back. Lol back to the dealer.”

But other owners aren’t laughing. Slem, another Canadian driver, who has a 2016 Camaro 2SS says, “GM needs to step up and fix this and some other known issues, or stop selling the cars until it's fixed.”

Masa is tired of the problems and getting angrier by the day. “Time to get the entire system replaced if they can't fix it because I'm not driving a 2017 Camaro with a rattling exhaust. One of the main reasons I bought this car was a great sounding exhaust and the fact that they had an NPP mode. Hopefully there is a proper solution to this problem because the Camaro is a wicked car. Not so wicked with a vibrating exhaust.”

James wrote on October 11, 2018 - 5:13pm Permalink
It gets worse. The rattle is so the dual exhaust doesn't bump against each other. Wait until the welded on this connector for the exhaust falls off then you have two holes with they exhaust coming directly out of it. Your car sounds like garbage and out of warranty it cost $3k to replace the entire exhaust. You could just cut and weld a piece on... But Good luck
Christopher Homan wrote on April 18, 2019 - 11:43am Permalink
Lifters bad in my 2016 Camaro 2SS at 76,000 miles. 2800.00 repair and no help from GM.
Manuel Yanes wrote on July 11, 2019 - 9:16am Permalink
my 2018 camaro ss with 5000 miles has the same problem when is in cold start and when i'm driving every time when i accelerate a little bit ,the sound appears i went to the dealer twice ,and GM said is normal in those engines ,but i don't like this sound on a new sport car ,is horrible ,if anyone has the problem resolve please put the comment ,thanks
James wrote on December 29, 2019 - 7:18pm Permalink
I had this issue on a 2017 Ca maro 1LT, my dealer put a whole new exhaust on. A bracket or piece broke inside the exaust from the heat cycles and was rattle of around. I don’t have the issue anymore. But am hesitant wether the new exhausted will hold up I’ve prob put 7k on the new exaust, I’m a daily spirited driver.
Minkah Baunjoko wrote on January 22, 2020 - 10:59am Permalink
I bought a 2017 camaro 2ss 50th anniversary edition with 4800 miles on it 10/19. By 12/19 it started sounding weird. It had a raspy sound in touring and snow/ice driving mode and a rattle when I revved the the engine. The first dealership examined the car and said there's nothing wrong with it and its supposed to sound that way. I said it didnt sound like that till about 2 weeks before I brought it to them. Then they said a flap in the exhaust pipe was causing the rattle. They had the car for 2 weeks and hadnt even started repairs so I took it to dealership number 2. First they said it was supposed to sound that way. Then after nearly a week they said the exhaust needed to be replaced. 7500 miles on it and only had it for 2 months before the problem started. GM is looking into it but the dealership insist its my responsibility because even the "platinum extended warranty" doesnt cover it because its a "wear and tear" item.
Samuel Laing wrote on January 23, 2020 - 12:25am Permalink
I don't know what is going on but my 2018 1LT camaro RS is having the same problem with unusual noises.. At first i taught it was the radio speakers but it wasn't, this very loud sound engulfs throughout inside of the car like a thunder when accelerating from 0 to 35mph..your ears becomes numb....wtf is going on with GM...this is not normal ..brand new camaro..
James wrote on January 25, 2020 - 12:28am Permalink
Just take it to your dealer and tell them to fix it. They will get you a rental too if you ask for one they have to while they’re fixing it. Ask them to check for bulletins on the exaust there should be a solid one for it by now.
Linda wrote on July 14, 2020 - 2:26pm Permalink
I own a 2017 loaded 2ss black bow tie six speed In the shop now five times for this popping noise coming from under car shock absorber manifold exhaust all replaced still popping metal noise after turning off car sitting ridiculous gm wont buy car back 14448 miles I bought it brand new 4/2018 garage kept
Ralph Cramden wrote on October 16, 2020 - 10:49am Permalink
This article is blown way TF out of proportion.