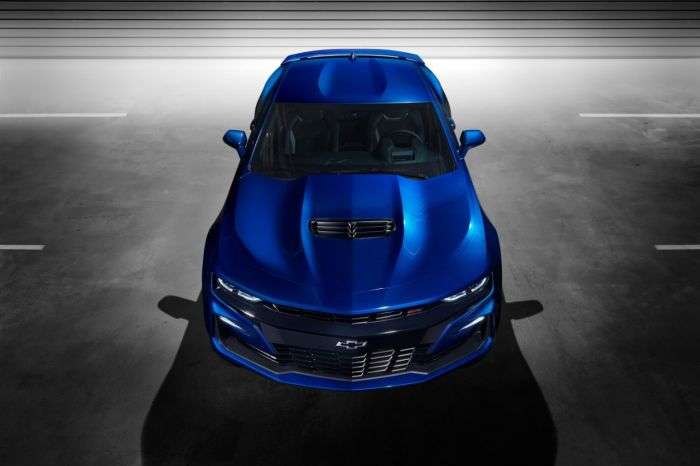 There have been a lot of articles detailing what fans detest about the 2019 Chevrolet Camaro, but there is a lot to like about the latest version of the performance car. Hear what the real enthusiasts have to say.
Advertisement

Keon, from Flushing, NY, is sick of all the negativity about the 2019 Chevrolet Camaro. Keon is asking for true fans to speak out on a popular Camaro forum. “So we all know there have been many threads/posts about the dislikes and hates of the new 2019 Camaro Refresh but thought I would make a new thread here for the few who actually like what they have done and are considering ordering it down the road.”
Chris’s list is short but sweet. “A10, Lower rear bumper cover, Hood.”

503 is a little more forth coming. “The LT, SS, and ZL1 models will be easier to tell apart. Each will have its own personality and enthusiasts. They added to the line-up with the T4-1LE (not exactly a sign the Camaro is winding down or going away, quite the contrary). P.S. Now they just need a non-SS, economy LS - V8 to complete the line-up.
Technician, from California, actually likes the new front end. “I won't lie, the front end of the lower trims/non SS looks pretty damn good. I just hate the ugly split look the SS has with the center painted black, but love how it flows from end to end in the RS cars, and with the bowtie in the grille instead of on the bumper.”

Hartford, from Connecticut, isn’t in the market but really likes the redo. “I plan on keeping my Camaro until it's dead in however many decades that is, but I like everything about this refresh. Seeing it in person will only make it better. The general public couldn't really tell the difference between the 5th and 6th gens besides those of us more hardcore fans. Just as many could tell the difference between the i4/v6/v8 just by looking at them. Just yesterday someone told me "hey man nice Shelby" about my car..... The Camaro team stepped up and made great looking different front ends to set them apart from the 5th gen and the 2016-18. The front fascia is nice IMO. Obviously the biggest change to differentiate it from previous models. It totally deviates from the regular Camaro lineage, but is that so bad? Everything can't stay the same with each generation. Looks have to evolve as the car evolves, and the Camaro is changing from a muscle car to a sports car.”

Buckeye would like the bowtie to move to somewhere else on the vehicle. “I actually think the entire design would look decent just removing the flowtie or moving it to the upper grill, either centered or to the driver side with the SS emblem.”

Miami drives a generation 6 Camaro and isn’t thrilled with the updated exterior. “I like ONLY the interior.”

Chris is softening his stance, adding to his list of likes. “Just black out the flow tie and you're done. The rearview camera option sounds really cool as well. Making the SS decidedly more aggressive is a step in the right direction. Considering the difference in price point, it should stand out over an LS or LT model. Taming down the LS and LT models is also a step in the right direction. It still looks sporty, enough so that it won't chase people away, but refined and civilized enough that it may draw some more folks to it that aren't looking for an aggressive car. Yes, there are many in that market.”

Delivery, from Ohio, likes a number of the changes. “The hood on the SS looks really good. The A10 is a cool addition. Rear camera will now be clearer. Forward Collision Alert.”

Renegade doesn’t like the front grille, but does like many of the updates. “I like the rear tail lamps and absolutely love what they did with the RS bumper. The RS looks like an extremely classy and slightly more futuristic version of the 5th gen bumper and gets me about as excited as I'd been back when the 5th gen debuted. In a convertible form, it looks like a proper representation of a late 1960s boulevard cruiser.”

Frax, from South Jersey, has a wonderful attitude about the looks of the 2019 Chevrolet Camaro. “The thing I like best about the 2019 Camaro is that it is still one of the best overall performance cars on the planet at any price. So many of us seem to get our underwear in a twist over the look of some of the plastic. In the driver’s seat none of that matters. Appreciate the process.”

Many of the aficionados like that the 2019 Chevrolet Camaro will have an automatic paired with the ten speed transmission.

They also like that the rearview mirror will also be a camera, to give them a more accurate sightline.

Lee , from Texas, says the 2019 looks promising. “I4 Turbo 1LE is a huge win. Styling on the LT models. Hood for sure. Rear view mirror is awesome, Especially with a ZLE high wing out back. And I like that they went all out just like they've been doing on the performance end.”

Killer says there are a few drawbacks but also some huge improvements. “I4 Turbo 1LE is definitely a huge win. I love everything about it. Styling on the LT models, the convertible looks great. A10, Tail lights. Hood for sure on all models. I feel the SS hood looks more aggressive. Rear view mirror is awesome. Especially with a ZLE high wing out back.”

Apex, from Wisconsin, says there are a lot of things to be positive about on the new Camaro. “I think the ss getting the A10 is a win. The Turbo 1LE is a cool trim level. The rear end looks decent enough. The front end on the "lower" non SS trim is pretty good as well. The updated SS wheels look decent.

Typically, even the naysayers will come around once the vehicles start to arrive on vehicle lots. Once you see the new trims driving around, the older models start to look a little dated. Hopefully, fans will warm up to the new front and rear ends. You know they will love the technical upgrades. It is just a matter of time.

Crag wrote on February 14, 2019 - 4:31pm Permalink
This is a comical and cheap looking refresh design. GM seems to care less about product more and more every year.