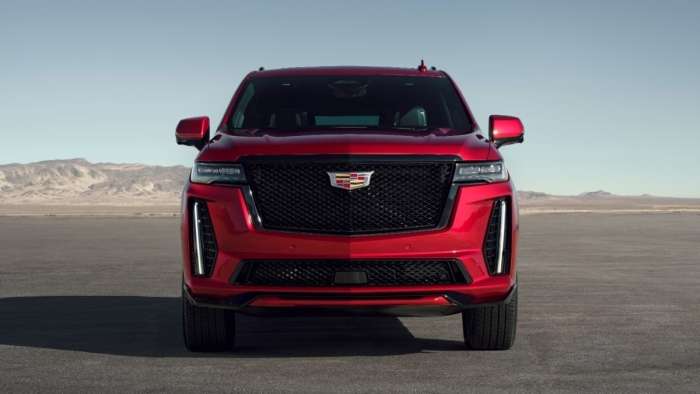 Cadillac is promising to reveal full details and specs for the 2023 Cadillac Escalade-V in May. Fans are anxious to know more about the performance version of Cadillac's luxurious SUV.
Advertisement

While GM is accelerating its EV timeline, it still understands the thrill and lure of a supercharged ICE engine. Cadillac is saying that we will finally get all the details on the hotly anticipated 2023 Cadillac Escalade-V on May 11, 2022. Cadillac first confirmed in January that the brand was adding the Escalade to the popular V line of vehicles. In a news release, Cadillac is confirming that the performance version of the luxury SUV will be revealed on the Cadillac website. Cadillac describes the new Escalade-V as having “Power like never before…with pulse-pounding specs”. During the May 11th reveal, Cadillac will also tell us when the new premium SUV will be available.

Cadillac describes the new version of the popular SUV this way:

“Cadillac’s V-Series is the ultimate expression of Cadillac design, performance and technology and the purest expression of the passion that exists at the core of the Cadillac brand. V-Series has always represented a potent blend of refinement and power, offering unique, bold, performance-inspired styling with head-turning presence. The 2023 Escalade-V is the first SUV to don the V-Series badge and joins the V-Series fourth-generation lineup.”

Currently, the most powerful 2022 Cadillac Escalade runs on a 6.2L V8 that is rated at 420 horsepower and 460 lb-ft of torque. It is expected to supercharge that engine or a very similar one and secure even more incredible performance. The Cadillac Escalade has proven extremely popular in the last year despite the semiconductor chip shortage. Demand for the premium SUV spiked with potential buyers waiting weeks to buy one.

When Cadillac confirmed the existence of the planned Cadillac Escalade-V, in January, it also revealed the sound of the new SUV's powerful engine.

Cadillac is still fully committed to its future EV lineup. It confirms it will start taking orders for the 2023 Cadillac LYRIQ EV SUV in May.

We'll know much more about the 2023 Cadillac Escalade-V May 11th. Check back for the latest details.