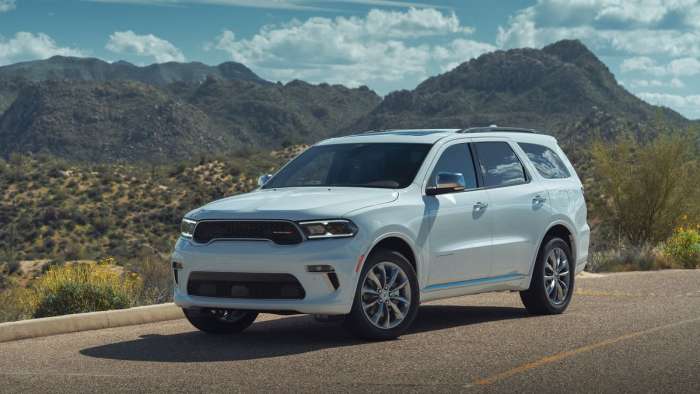 The 2021 Dodge Durango was just given the Vincentric Best Value in America award for the Large SUV/Crossover segment. We look at what makes the Durango stand out in the crowded field.
Advertisement

The 2021 Dodge Durango just earned an award for being the best value in the Large SUV/Crossover segment. That is huge because while you hear a lot of advertising for its competitors, the Dodge Durango just keeps winning. In 2020, Dodge was named the "#1 Brand in Initial Quality," making it the first domestic brand ever to rank No. 1 in the J.D. Power Initial Quality Study.

Why the 2021 Dodge Durango Was Chosen for Best Value

The Vincentric awards look at several different aspects of vehicles and ranks them. Vincentric looks at total cost of vehicle ownership compared to the market price of the vehicle. Vincentric then supplies the information to other companies that rate vehicles, like J.D. Power and AAA.

According to Vincentric, the 2021 Dodge Durango performed well in three key areas.

"The Dodge Durango had a strong performance in the 2021 Vincentric Best Value in America awards,” said David Wurster, Vincentric President. “It had the best results in more cost categories than any other vehicle in its segment, including the lowest fuel, depreciation, fixed and operating costs. Combined, these low costs helped the Durango outperform all competitors and earn the win for 2021."

Best-in-Class Towing for All Durango Models

The 2021 Dodge Durango also has the best-in-class towing capacity across its trim packages, so it is great for families towing boats or campers. Look around you, it seems the pandemic has encouraged lots of families to vacation closer to home or invest in campers and other recreation vehicles.

The Dodge Durango's interior has been significantly upgraded for 2021 so drivers can get the latest Uconnect5 infotainment system. The exterior has also been upgraded so it looks more like its aggressive Dodge family members – the Dodge Charger and Dodge Challenger. The 2021 Dodge Durango is available in six models - SXT, GT, Citadel, R/T, SRT 392 and the new 710-horsepower Dodge Durango SRT Hellcat – the most powerful SUV ever.