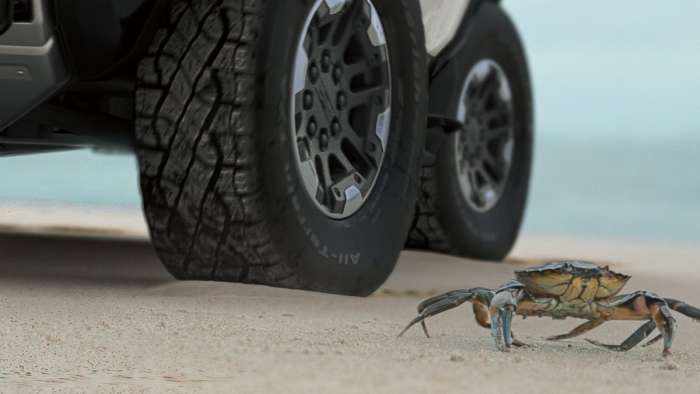 GMC says the all-new Hummer electric pickup can move diagonally, which would be a great feature for off-roading. We also found out when we will see the new pickup.
Advertisement

GMC says we will finally see what it is calling the first electric supertruck, the all-electric GMC Hummer EV, on October 20, 2020. GMC released new video of the GMC Hummer EV, showing the front and back wheels turning diagonally. GMC says that the Hummer EV will lead the industry in being able to drive like a crab, a feature they say is designed for off-roading.

Not only will the GMC HUMMER EV will be revealed to the world on Tuesday, Oct. 20, but authorized GMC dealers will be able to start taking reservations for orders then. The all-electric pickup won’t go into production until late 2021. It is expected to debut as a 2022 model.

According to GMC, “The supertruck’s industry-leading Crab Mode feature is enabled by the GMC HUMMER EV’s four-wheel steering capability, allowing it to move in a diagonal direction – functionality that is tailor-made for off-roading customers.”

Many of the details appear aimed at Tesla and its proposed electric truck. GM says development of the all-important Ultium battery is on track. The Ultium battery is what GM is counting on to give its new generations of electric vehicles longer range. Super-fast charging would also help the super truck compete against Tesla’s planned all-electric truck. GMC is promising that the Hummers will have the latest generation of Super Cruise, which is GM’s most advanced self-driving technology. Super Cruise does require the driver to stay engaged while driving. Tesla originally seemed to captivate many drivers with its auto-pilot mode. There have been a number of accidents tied to drivers not paying attention and letting auto-pilot actually drive the Teslas. A number of the Teslas have driven into emergency vehicles that are parked on roadways.

Other details suggest that the Hummer all-electric pickup could compete with Ford’s new Bronco. GMC says the vehicles will feature both an Adrenaline mode and the Crab mode. The Crab designation is designed specifically for off-roading.

Several people have speculated that a version of the GMC Hummer EV could be a perfect vehicle for the military because it would be silent and be able to travel for long periods without the need for refueling trucks. It could carry its own generators to provide electricity for charging.

GMC says it will be providing the information so that everyone can watch the unveiling closer to October 20, 2020.