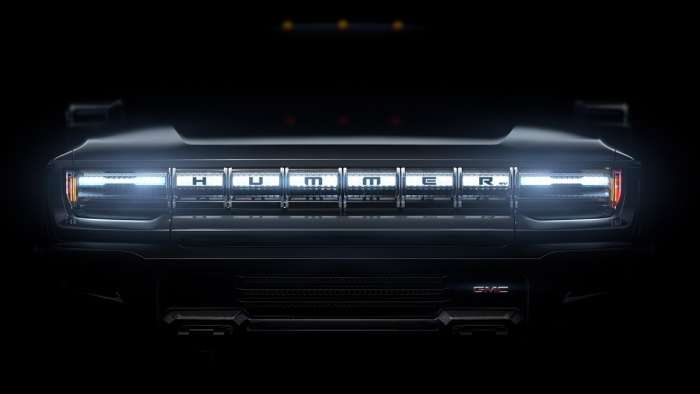 GMC announced today that it will finally reveal the 2022 GMC Hummer EV this fall. However, the video they released gives some new details and shadowy views of both a truck and an SUV version.
Advertisement

GMC is saying that it will finally reveal the 2022 GMC Hummer EV this fall. However, they released a new video about the truck featuring LeBron James. The video contains new details about the truck and also what appears to be an SUV version. If you watch the video closely, it appears to show engineers working on the truck in the lab. It shows the open-air infinity roof and gives us a new look at vehicle’s front end.

GMC refers to the Hummer as an all-electric super truck and says it will go into production in the fall of 2021. GMC says they will not only reveal the vehicle but start taking orders for it this fall.

Lebron James narrates the video and it has a soundtrack that is reminiscent of Jurassic Park movies, when the giant dinosaurs are arriving off-screen. The message is clear, something big is about to arrive.

Many of the details appear aimed at Tesla and its proposed electric truck. In a separate release, GM says development of the all-important Ultium battery is on track. The Ultium battery is what GM is counting on to give its new generations of electric vehicles longer range. Super-fast charging would also help the super truck compete against Tesla’s planned all-electric truck.

GMC is promising that the Hummers will have the latest generation of Super Cruise, which is GM’s most advanced self-driving technology. Super Cruise does require the driver to stay engaged while driving. Tesla originally seemed to captivate many drivers with its auto-pilot mode. There have been a number of accidents tied to drivers not paying attention and letting auto-pilot actually drive the Teslas. A number of the Teslas have driven into emergency vehicles that are parked on roadways.

Other details suggest that the Hummer could compete with Ford’s new Bronco. GMC says the vehicles will feature both an Adrenaline mode and a Crab mode. The Crab designation suggests that it will be suitable for off-roading.
If you slow the video down you can see a shadowy outline of what is definitely a truck, but there is also an outline of a vehicle that looks much more like the Hummer SUV.

Several people have speculated lately that the GMC Hummer EV could be a perfect vehicle for the military because it would be silent and be able to travel for long periods with out the need for refueling trucks. It could carry its own generators to provide electricity for charging.

GMC did not say when in the fall it will be revealing the 2022 GMC Hummer. Typically, automakers have revealed important electric vehicles at the Los Angeles Auto Show, because the show focuses on environmentally friendly or green vehicles. However, the Coronavirus has forced the cancellation of just about every major gathering for 2020. Technically, the LA Auto Show is still scheduled for late November, but it may not be feasible, depending on the COVID-19 situation. The huge CES or Consumer Electronics Show has already been cancelled for early next year.

We will let you know more details as they become available.

Tesla-Funded Research Reveals One of The Biggest Mysteries of EV Battery
Tesla Tesla Buyer Nets a Whopping $12,000 Discount After Asking for Reduction
END_OF_DOCUMENT_TOKEN_TO_BE_REPLACED