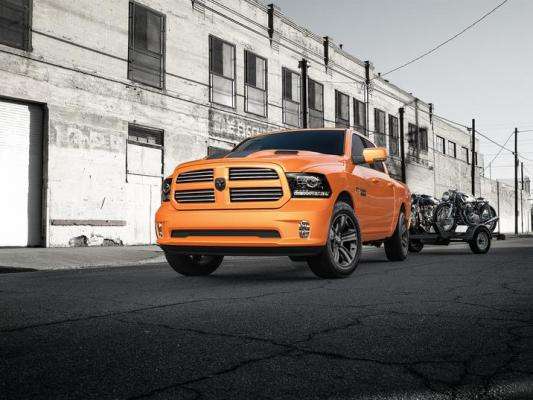 I could write for days about all of the problems with the 8.4 Uconnect radio and navigation systems. Some 2017 Ram 1500 owners share their tricks to reboot the Uconnect systems.
Advertisement

Popular truck forums are filled with complaints about the Uconnect systems in the 2017 Ram 1500. There are multiple complaints with the Navigation systems malfunctioning and the radios getting poor reception. The complaint I saw today is an odd one. TS writes about his radio freezing up. “Odd issue with the 8.4 Nav radio on my new 2017 Ram - buttons stopped working! Basically the only way I could change the radio station was with the rotary knob - the steering wheel buttons, touch buttons, everything else wouldn't work. I power cycled the truck a couple times – didn’t do anything. Finally at home I had the truck shutdown for about an hour, and then everything was fine. Has anyone run into this?”

Several owners suggested that TS at least start keeping notes about the problem. Others suggested he try asking the dealer. Hunter, from New Jersey, says “I would start a paper trail in case you have an issue when the warranty is up.”

Yankee suggested that the locking or freezing up could be tied to service that Uconnect is currently conducting. “I wonder if had anything to do with the satellite download update that FCA is doing this month. It didn't affect my radio, as far as i can tell.

It does mention that you could lose your presets. The download took between 10 - 15 minutes. Then it rebooted & updated the system which took another 3 - 5 minutes.”

TS called two dealers but they were unable to help him over the phone.

Jockey points out that all computers need a little help sometimes. “It is a computer so a re-boot sometimes works. If anyone can explain why you have to do that I'd be ever so grateful.”

Great idea but how do you reboot the system? TS asked the service representative on the phone and the answer was surprisingly low-tech. “The guy says "Well, you could unplug the battery when you get home" lol Thanks for the re-set tip!”

Disconnecting the battery may be low-tech but it works. I learned that the hard way when the MyFord Touch system went haywire on a Ford Fusion, we had rented. It isn’t pretty but it works in a pinch.

AJ has the best advice about how to handle rebooting the system. He learned it from a service tech after his radio locked up in his 2016 Ram 1500. “A similar thing happened to me a year ago with a new 2016 LongHorn as I left the dealership with it. I didn't notice it for a few miles because I was concentrating on navigating the interstate system in OKC, but when I went to change the station or work with the nav system, it was frozen. I called the dealership and they put me through to service. The best he could offer was "it must be downloading an update" and then said to shut the vehicle off and see if it was frozen when I restarted. It worked fine when I restarted the vehicle and never gave me another problem. You can manually reboot the nav system by pushing in on the center of the volume and tuner knobs at the same time and holding them down for a few seconds. You should see the system power down and then boot back up. Hopefully yours will be a very limited experience as well. My other units have all performed with no issues at all. Best of luck with it.”

Now that is great advice to know! I wonder if that same rebooting helps at all with the Navigation system that has given people fits. At least if your radio freezes up, this is an approach to try.