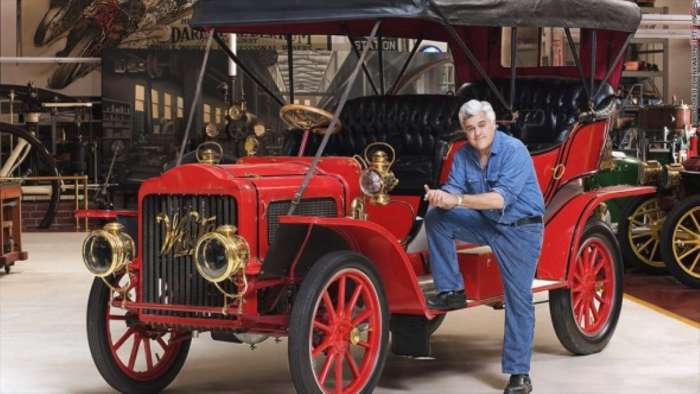 Jay Leno is one of the best known car enthusiasts in the world. He is recovering in a California burn center after being burned by gasoline when one of his Steam Cars started on fire.
Advertisement

72-year-old Jay Leno is recovering in a California hospital after being burned in a car fire in his well-known private garage. The injury came to light after the former late-night host and comedian was forced to cancel several appearances because of the incident. Leno canceled an appearance at a comedy club Saturday night and was scheduled to perform at The Financial Brand Forum 2022 in Las Vegas on Sunday night, but he canceled due to a health issue.

People Magazine received this statement from the Forum.

"His family was not able to provide us very many details, but there was a very serious medical emergency that is preventing Jay from traveling," the email stated. "All we know is that he is alive, so our prayers go out to him and his family tonight."

Jay Leno often makes appearances at Auto Shows on behalf of different automakers. I have interviewed him several times at the Detroit Auto Show. He is a great fan of the Chevrolet Corvette and has made several appearances for General Motors but represents other vehicle companies as well. He once showed up to a GM event in Los Angeles driving a vehicle powered by a jet engine. His popular cable show called Jay Leno’s Garage highlights all makes and models. He frequently features other comedians like Tim Allen as they discuss their favorite vehicles. He admits to owning nearly 300 vehicles. I have seen him driving several on the roads around the Burbank Airport, in California.

One of his employees told Access Hollywood today that "nothing life threatening" occurred to the comedian following the fiery incident in his garage. George Swift, an employee and friend of Leno’s, told Access Hollywood on Monday that Leno, 72, is "going to be fine" after sustaining "serious burns" in a garage gasoline fire.

"He's a tough guy, he's going to be fine," Swift said, "It's nothing life-threatening. He's in great spirits, but you know, it's going to take awhile."

Swift explained that Leno was working on a steam car on Saturday and it caught fire. "Steam is made by gas, and he got sprayed with some gas and it ignited," he said. Leno was apparently burned on his hands and the side of his face. Leno collects Steam cars. He talked about them on an episode of My Classic Car with Dennis Gage.

Jay Leno released a statement confirming that he has “serious burns”.

"I got some serious burns from a gasoline fire," he said in a statement. "I am ok. Just need a week or two to get back on my feet."

Aimee Bennett, a spokesperson at the Grossman Burn Center, also issued a statement, confirming that Leno was being treated there after the incident in his garage.

"Jay wants everyone to know that he is in stable condition and receiving treatment ... for burns that he received to his face and hands from a gasoline accident in his garage over the weekend," Bennett said. "He is in good humor and is touched by all the inquiries into his condition and well wishes. [He] wants to let everyone know he is doing well and is in 'the best burn center in the United States.”

Now word on when Leno will be released or if any of his injuries will require surgery.