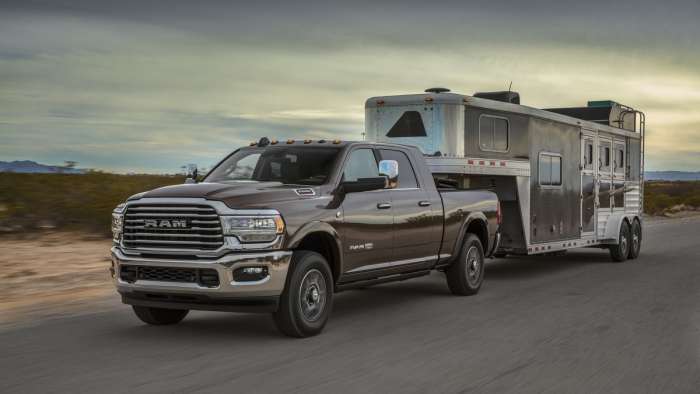 Ram is adding some key features to make towing safer and easier for the drivers of the 2022 Ram 2500.
Advertisement

The 2022 Ram 2500 already has a great reputation for its towing ability. It is considered the most capable truck of its size, able to tow up to 20,000 pounds. If the truck is outfitted with the 6.7-liter Cummins Standard-Output Turbo Diesel, it produces 370 horsepower and a massive 850 lb.-ft. of torque. Now, Ram is making towing even easier and safer for the 2022 Ram 2500 by adding some new towing features.

The new “Tow mode” is now available with the digital rearview mirror. This allows the truck driver to virtually see what is behind the trailer. The safety feature uses a remote camera to truly show the driver what is behind the trailer, so the driver knows if someone is coming up behind them. It also shows the driver if he/she has room to get over into another lane. Too often the trailer obstructs the truck driver’s view and makes changing lanes unsafe. Tow mode also will help drivers significantly when backing up or parking their rigs. Tow mode will make nearly every situation easier, from getting fuel to maneuvering through parking lots.

Similarly, Ram has a new feature called Trailer 360 View, that uses four different cameras to provide a bird’s eye view of what is around the trailer. The special set up gives a 360-degree view of the trailer and its immediate surroundings. Anything that increases the driver’s awareness of what is around the trailer makes maneuvering safer. It will make parking and getting on the road easier. It will help the driver avoid the poles and barriers that might be too close to the trailer. The Trailer 360 View kit includes four cameras and the wiring that is needed to set it up.

A new package of lights is available to illuminate the trailer hitch, making it easier for the driver to hook up a trailer. This is perfect for anyone hauling a camper, a boat or a trailer carrying ATVs into the great outdoors. If you have ever tried to hook anything up as darkness is setting in, you know the nightmare. It is especially problematic near water or campgrounds where there are few if any streetlights. The Trailer Hitch Light package is now included in Trailer Tow Group and includes four LED lights that provide clear, crisp light from directly above the trailer hitch. Hopefully, the new set of lights will make hitching up the trailer much easier and safer.

Studies show the vast majority of heavy duty truck owners use their vehicles to tow. Now hauling will be even easier to manage. These are just the latest features that Ram has added to make towing easier and safer for the 2022 Ram 2500.

Ram already made Lane Keeping Assist and Adaptive Steering available for all trim levels of the Ram 2500. That technology alerts drivers if they are drifting out of their lanes, which gives drivers the chance to correct their path before anyone gets hurt. Adaptive Steering can change the truck’s gear ratio while it is moving, giving the driver better control while traveling at lower speeds. Blind-spot Monitoring is also available, not just for the truck but also to cover the trailer. Again, that is technology designed to protect other drivers on the road as well as the truck operator. Preventing crashes makes everyone safer.