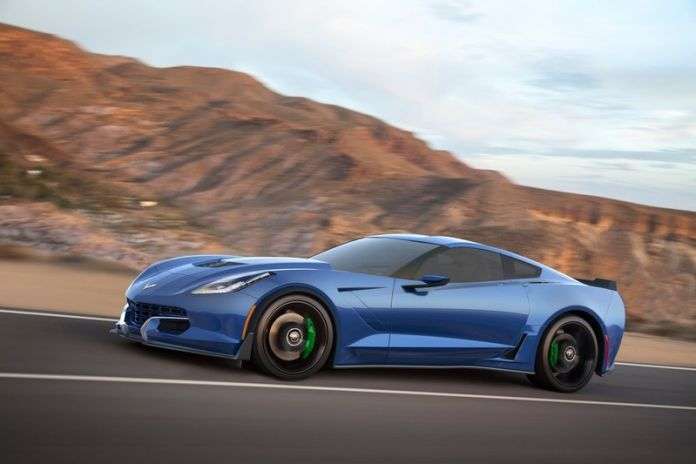 The GXE Electric Corvette is racing toward production at 209 MPH

Genovation, the high end customizer, says it will unveil its production version of an electric Corvette at the Consumer Electronics Show, in Las Vegas, in January. Tests earlier this year showed that the electric vehicle could hit 209 MPH. The vehicle will be based on the C7 Chevrolet Corvette.
Advertisement

Look out Tesla! Another high end electric vehicle maker wants to pass you in performance and sales. The Genovation GXE is based on one of the most iconic vehicles of all time, the seventh generation 2014-2017 Chevrolet Corvette. But, how many people will ever be able to own the limited edition GXE?

You may remember that, last spring, Genovation was able to set the record for having the fastest street legal electric car when it tested its GXE at a proving grounds, in Florida. The GXE rocketed to 209 MPH, beating its previous record of 205 MPH. Now, two new partners will help them build more of the vehicles. Genovation is using Prefix Corporation to build more of the GXE prototypes at its facility in Rochester Hills, Michigan. The company already specializes in building prototypes and concepts for the Detroit Three.

Prefix will oversee GXE engineering, integration, prototyping and production planning. That last phrase is the key because it suggests there will be a larger scale production than just a few vehicles.

A California based company named Stafl Systems will oversee production of the electrical systems, battery-pack integration and powertrain performance.

In his statement, Andrew Saul, the CEO of Genovation says, "We're thrilled to have begun the next evolution of the GXE with these two world-class partners. We're a driven team that is focused on offering the highest performing street legal electric car in the world."

GXE on display in January 2018

The GXE prototype must be pretty far along because they are planning to display it at the Consumer Electronics Show, in Las Vegas, on January 7, 2018.

Unlike many companies that do flash-in-the-pan attempts to customize or up-fit vehicles, Genovation has dedicated a few years in attempting to build an electric supercar. By bringing on companies that specialize in vehicle and powertrain production, they appear serious in their endeavor.

The problem is the cost. Genovation is not saying how much the new version of the GXE would cost. Last year, Genovation said it would build 75 of the GXEs at a cost of $750,000 a piece. While it is fabulous to own a limited edition supercar, there are very few people willing to shell out that kind of money for a super electric Corvette. The idea of being able to go that fast is enticing but you can own other very fast cars for much less. The gasoline-powered Ford GT has a top speed of 216 MPH and sells for $450,000. Of course, increasing production should bring down prices. There is a certain cache to owning an incredible vehicle. We will see if they can draw buyers for the limited edition GXE electric Corvette.