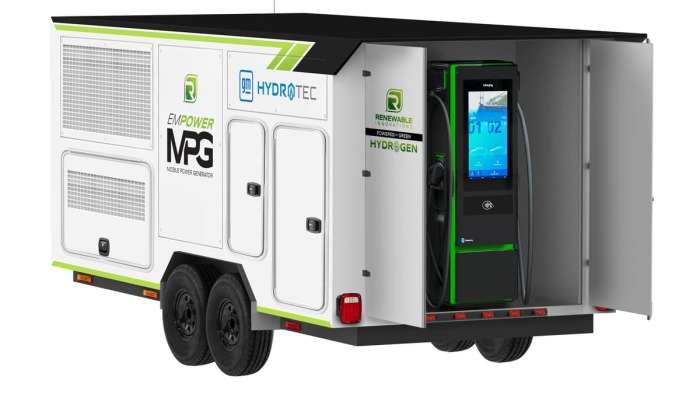 GM announced a new partnership to expand using its fuel cell technology beyond powering trucks, planes and trains. One type of fuel cell can be used to power charging stations to charge vehicles likes the Chevrolet Silverado EV.
Advertisement

I have reported several times on GM’s plan to sell its Ultium battery and Hydrogen Fuel Cell technology to raise money. GM is investing in converting the technology for use in airplanes, tractor trailers and even trains. Now, GM is partnering with another company to use its Hydrogen fuel cell technology to produce portable electric charging stations that could be used to recharge vehicles like the 2024 Chevrolet Silverado EV. The two companies will also partner on other larger hydrogen fuel cell generators that can be used to power job sites or even military campsites.

GM’s Hydrogen fuel cell business called HYDROTEC will provide the fuel cells to Renewable Innovations to build several different types of chargers and generators. One of the generators is called a Mobile Power Generator (MPG). This fairly portable generator (shown in the photo above) could be used to quickly recharge vehicles like the 2022 GMC HUMMER EV or the 2024 Chevrolet Silverado EV. These smaller charging stations could be used in situations where the chargers don’t need to be permanently installed. They could be used to recharge vehicles in emergency situations or remote locations. Most importantly, they wouldn’t have to be wired into the electrical grid.

A larger fuel cell based EMPOWER rapid charger could help retail gas stations add affordable DC fast charging without expanding the grid. They could be added to the property without spending a fortune to change the infrastructure. The hydrogen fuel cell would generate the electricity while burning more cleanly and not adding pollutants to the area. The EMPOWER rapid chargers can be installed near places frequented by travelers only part of the year, such as near national parks or vacation destinations. The EMPOWER generators could recharge four vehicles at the same time in only 20 minutes. Renewable Innovations hopes to have 500 of the EMPOWER charging stations throughout the country by 2025.

Larger Generators that Fit on Pallets

A larger, more permanent, hydrogen-based generator could be used more like a standard large generator. GM refers to this larger generator as palletized. The palletized MPG could be used on worksites or for back-up to power larger buildings. One key use could be for the military. The larger generators could be taken to military campsites to provide power for operations and to charge vehicles. GM is doing significant work with the military through its GM Defense department. They are continually looking for ways to make transportation safer and more sustainable for personnel working in remote, potentially dangerous locations.

According to GM, “These fuel cell generators could ultimately replace gas- and diesel-burning generators with fewer emissions at worksites, buildings, movie sets, data centers, outdoor concerts and festivals. They could also back up or temporarily replace grid-sourced electricity for residential and small commercial enterprises at times of power disruption.” In other words, they could do all of the things that gas-powered generators do, with fewer emissions.
Each of these HYDROTEC-based power generators feature zero-emissions electric power generation output ranging from 60 kilowatts to 600 kilowatts, while producing less noise and heat.

“Our vision of an all-electric future is broader than just passenger vehicles or even transportation," said Charlie Freese, GM executive director of the global HYDROTEC business. “Our energy platform expertise with Ultium vehicle architectures and propulsion components and HYDROTEC fuel cells can expand access to energy across many different industries and users, while helping to reduce emissions often associated with power generation.”

“As pioneers and innovators in the hydrogen power space, Renewable Innovations sees exciting opportunities across consumer, business, government and industrial markets,” said Robert Mount, CEO and co-founder of Renewable Innovations. “We’ve seen that there’s a need for EV charging in places where there’s no charging equipment, and now we’re committed to bringing the best technology and game-changing applications to market with GM to accelerate the company’s vision of a zero-emissions future.”

California Investigating How the Generators Could Help Fight Wildfires

GM says that California is looking into using these larger hydrogen-based generators to help provide power during the periods when they have to turn off the electrical grid trying to prevent the spread of wildfires. Some of the recent California wildfires were reportedly triggered by sparking or arcing electrical wires.

Tommy Trahan wrote on February 10, 2022 - 11:21pm Permalink
My interest is H2 with EV in one truck
George Kafantaris wrote on February 13, 2022 - 9:58pm Permalink
Charging millions of battery cars (as we have envisioned) is not feasible under our current electric grid architecture. This is so no matter how good or cheap battery cars might get -- or how quickly they can recharge. In the end, all battery cars need to tap into the electric grid. To make this possible, we can either redo our grid or supplement it throughout with power generators. The power generators can run on fuel oil or on natural gas. Or they can run on hydrogen. If they run on fuel oil or natural gas, the benefit of having battery cars is defeated. If the power generators run on hydrogen, they will need to be refueled -- which means we must put a hydrogen infrastructure in place to do so. But if we are going to have a hydrogen infrastructure to refuel hydrogen generators to charge battery cars, why not use the same infrastructure to refuel hydrogen cars and trucks to use the hydrogen directly?