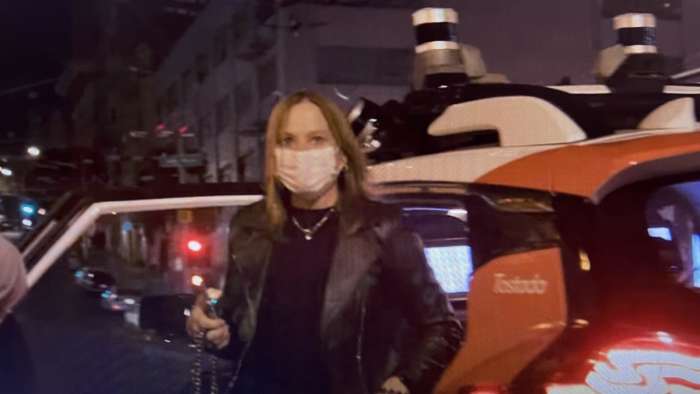 GM's top executive tweeted out a video of herself riding in an autonomous Chevrolet Bolt vehicle with the head of Cruise. Barra says while inside the vehicle, "It's too bad we have to wear masks because I can't stop smiling."
Advertisement

GM Chair and CEO Mary Barra calls her first ride in the autonomous Cruise Bolt, “Nothing short of incredible.” Barra tweeted about the ride, yesterday. “I took my first @Cruise driverless ride in San Francisco with @kvogt, and it was nothing short of incredible. This is the type of experience we used to dream about, and now with Cruise, our autonomous future is here. Congrats, Cruise team!”

The video shows Barra summoning the autonomous vehicle on her phone and then going for a ride with Kyle Vogt, one of the co-founders of Cruise and current CEO. The car drives them through the streets of San Francisco, and it appears to be just before midnight. GM President Mark Reuss is shown riding in another Cruise driverless Bolt, named Disco, along with Craig Buchholz, the vice president of GM communications.

The video says the rides happened last week. Mark Reuss posted a similar but much shorter clip on social media on January 20th. The January 20th clip does not include video of Mary Barra. Apparently, Cruise has been testing the driverless cars at night since last summer. Mary Barra makes several comments during the nearly three-minute video, praising the ride in the vehicle named Tostada, as well as the Cruise autonomous technology.

Early on Barra says, “I always believed that we’d be doing it. But to actually be doing it, it’s just surreal!”

Barra goes on to say that she believes the technology will win over any doubters. Barra says, “A lot of people have asked me, “Well, how are you going to get people to use it?” Barra then says, “It’s like, OK, we were in the vehicle for 5 minutes, and the trust is here. I really think that the apprehension that some people think they have is going to dissipate extremely quickly when they get the experience.”

GM owns the majority of Cruise and the two companies have been working on the autonomous technology since 2016. Both Barra and Reuss must have tremendous faith in Cruise and the technology that both agreed to ride in the vehicles at nearly the same time. Imagine, the two top executives of one of the largest companies in the world taking the driverless ride at the same time. I’m surprised that the company’s lawyers and insurance company would agree to it. That is one huge leap of faith.

Barra says during the ride, “It’s like a highlight of my career because we know what this technology can do.” Barra calls her first ride “Incredible”.

Cruise to Change the Way People Can Travel

The video concludes with the GM CEO Barra saying, “This is going to change the way people move in such a positive way, that I feel privileged to have known you since 2016 and be on this journey and watch what the Cruise team has accomplished. So, I’m over the moon!”