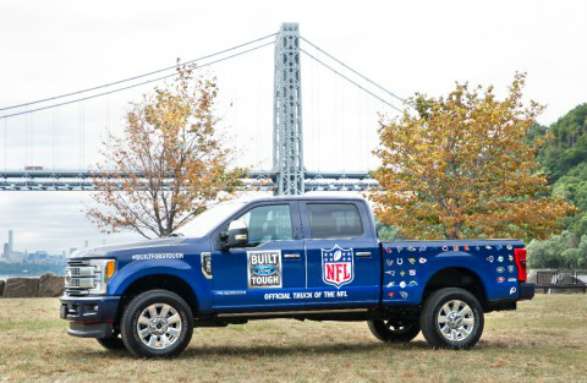 Ford F-150's big brother and Uber team up for football

Just in time for the return of the NFL football season, the Ford F series is starting a 3-year stint as the official truck of the NFL. To celebrate the new partnership, Ford is also joining forces with Uber, providing a special fleet of F series super duty trucks that can be ordered for tailgating. The super duty truck is a bigger, more rugged version of the F-150. The trucks are usually F-250s.
Advertisement

Football and trucks have been synonymous for years. General Motors used to be the big sponsor but Hyundai signed a contract to be the official car and SUV of the NFL last year.

The most interesting thing about the new partnership is the use of a specific vehicle and its availability through Uber. So far the special ‘Built Ford Tough Tailgate Trucks on Demand’ are only available in New York City. They have to be ordered through the Uber app and the F-series Super Duty trucks will come loaded with tailgate food and merchandise.

Throughout the football season, a fleet of the trucks will be available in other NFL cities. Ford and the NFL will also team up to highlight the Offensive Line of the Week, to honor some of the toughest players in the league. According to Ford vice president Mark LaNeve “Both brands – each a leader in its category and known for toughness, capability, excellence and innovation – are coming together to give fans exclusive access to events and games, and to highlight players in a new way.”

Ford is also running a sweepstakes for fans to try to win tickets to games and the opportunity to experience the “Tailgate Truck on Demand,” through the website NFL.com/Ford. The NFL season officially kicks off September 8, 2016, with the Super Bowl champion Denver Broncos taking on the Carolina Panthers.

The strategy of making certain halo vehicles, like the F-150, available through Uber appears to be a new one and it is an experiment that we may see more of. It is especially interesting to see it in the urban areas where it may be difficult to own a truck, but highly desirable to have a truck for an event like tailgating. It opens all sorts of possibilities for professional events as well as college activities. Using Uber also shifts away from traditional, more expensive alternatives like rentals.

Ford is experimenting with all forms of mobility, like making it easier to transport e-bikes as well as car sharing. This latest venture will not only be a great advertising venue for the auto and truck maker, but it will give them great feedback on the viability of using Uber to promote specific vehicles.

My big question would be; Who drives the vehicle and are they stuck in the truck for the whole day?