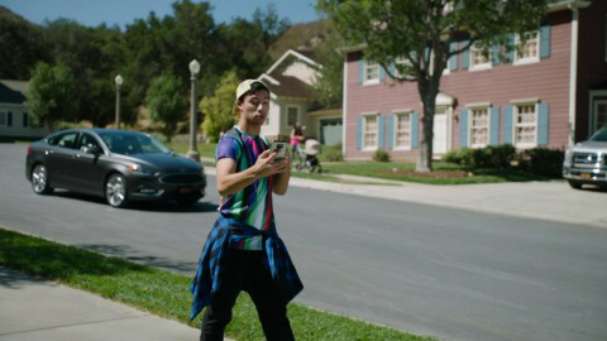 A pedestrian gets hit by a vehicle every eight minutes in the U.S. Ford is debuting new technology to help stop the accidents. Ford attributes the increase in accidents to pedestrians texting rather than paying attention while walking.
Advertisement

Ford is even using a word out of the Urban Dictionary to describe what is causing the increasingly common problem. A petextrian is a person who texts while walking.

Several automakers have developed pre-collision warning systems to avoid front end crashes. Ford is taking it a step further, fine-tuning the technology to detect people on foot and try to predict the walker’s behavior.

Ford Pre-Collision Assist with Pedestrian Detection will debut as an available feature for the 2017 Ford Fusion. It is programmed to help predict pedestrian movement.
Aaron Mills, Ford safety engineer says in a statement, “We were startled to see how oblivious people could be of a 4,000-pound car coming toward them. It was a real eye-opener to how distracted people are today.”

Ford’s Pedestrian Detection technology uses a combination of radar and camera technology to scan the road ahead for people on foot. If a person is detected, the vehicle alerts the driver with a visual and audible warning. It also temporarily mutes the audio system. If the driver does not react to the warning, the technology can automatically apply the brakes to slow down or stop the car. The automatic braking should lessen the potential impact or even avert it altogether.

Ford tested the new Pedestrian Detection technology in daylight and at speeds up to 50 miles per hour. It uses a camera mounted on the windshield, which has been programmed with certain pedestrian scenarios. It also uses radar located near the bumper to detect shapes in front of the car. The onboard computer combines the information to calculate the possibility of an accident.

Ford says “While the system may be especially helpful in unexpected situations, it does not replace the driver.”

Nothing will prevent every accident and the automakers are still trying to find ways to stop children, deer and other creatures from darting out in front of moving vehicles. The pedestrian detection system appears to be a huge step in trying to prevention the often catastrophic collisions.

While the Ford Pre-Collision Assist with Pedestrian Detection will debut on the 2017 Fusion, you can expect it to be quickly added as an option to other Ford and Lincoln vehicles.