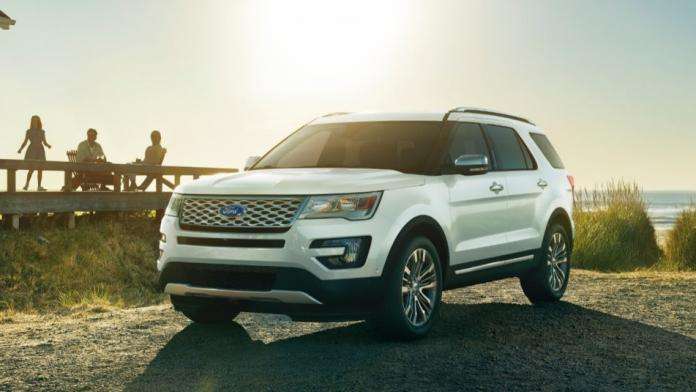 Ford is offering to check and modify for free any 2011-2017 Ford Explorers because of recent concerns over carbon monoxide. The problem was found in Ford Explorers, called Intercepts, that are outfitted for police use. Ford says there is no danger in regular passenger Explorers, but is agreeing to make any repairs.
Advertisement

Ford motor is voluntarily agreeing to make some minor changes to 1.4 million 2011-2017 Ford Explorers. Ford contends that the Explorers are absolutely safe but many owners are concerned after carbon monoxide problems were reported with the Police Intercept vehicles. Ford says the problems with the Intercept vehicles are because of unsealed holes that were left behind after police equipment was installed.

Ford released a statement announcing the free repairs. In it, the company says, “Ford is aware that some 2011-17 Explorer owners have concerns about exhaust or carbon monoxide. These vehicles are safe. Our investigation has not found carbon monoxide levels that exceed what people are exposed to every day. However, for our customers’ peace of mind, Ford is offering a complimentary service that reduces the potential for exhaust to enter the vehicle. Customers can take their vehicles, regardless of mileage or warranty status, to a Ford dealer to have this service performed, starting Nov. 1, 2017 through Dec. 31, 2018.”

This is technically not a recall. Ford didn’t let it get to that stage. The National Highway Traffic Safety Administration announced recently that it was looking into the owner’s concerns and Ford decided to go ahead and address the problem.

The Ford reference number for the service is 17N03.

Ford says the modifications will reduce the potential for any exhaust to enter the Explorers. Dealers will replace the liftgate drain valves and inspect all of the seals at the rear of the vehicle. Dealers will also reprogram the air conditioners to increase the amount of fresh air that comes in to the vehicle.

This action involves approximately 1.3 million vehicles in the United States, 84,000 in Canada and 24,000 in Mexico.

Earlier this year, several police departments nationwide pulled their Police Intercept vehicles out of service after complaints from officers that fumes were giving them headaches and nausea. At least one officer claims he lost consciousness. Ford investigated and found that the retrofitters drilled holes for police lights and radios that may have allowed exhaust fumes to seep into the cabin. Ford has offered to pay for the repairs to the police vehicles. Sales of police vehicles are huge for Ford and the Intercept, based on the Explorer platform, is one of their biggest sellers.

Ford has set up a hotline for customers who have questions. The hotline number is (888)260-5575.
The service only applies to the 2011-2017 Ford Explorers. Ford changed the body style in 2011 and the problem was not reported with the older style SUVs.

DONNA TALBOT wrote on November 3, 2017 - 12:16pm Permalink
Ford is saying these Explorers are safe to drive. Then why after driving for 30 minutes on the interstate did our vehicle register 64ppm. We have been sick for over 2 years with carbon monoxide poisoning. We purchased a low level carbon monoxide detector and tested it because the Ford dealership had been lying to us for 2 years and saying there was no proof. That is a LIE, WE PROVED IT IS INSIDE OF OUR VEHICLE. SO TELL FORD TO STOP LYING! FEEL FREE TO CONTACT PLEASE! THIS MAKES ME SO ANGRY! WE CAN'T EVEN DRIVE OUR VEHICLE. IT HAS BEEN PARKED FOR MONTHS.
bob wrote on November 4, 2017 - 8:11am Permalink
I have the same problem, fumes when aprox 3/4 throttle ,like passing,or getting on interstate.My question is why is there any leak in exhaust system PERIOD! Shouldn't be any leak any where. smells like some shit to me.