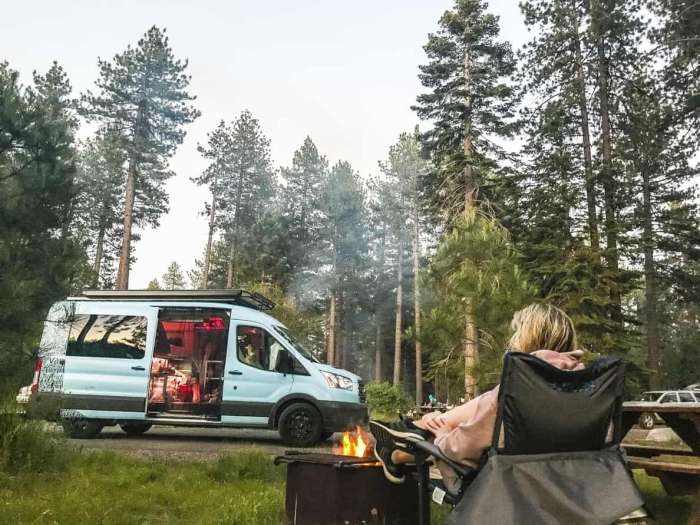 As Ford struggles to regain its footing, it is focusing on growing some of its vehicles that are doing well in the current marketplace. Ford's vans are leading the segment and the Transit is growing its audience, with full-size van sales up 23 percent since Transit was introduced in 2014.
Advertisement

Remember the days when conversion vans were the rage? It wasn’t that long ago and just like bell-bottom pants, they are coming back. Ford is celebrating its success in the full-size van market and finding ways to grow the segment. Ford claims that the Ford Transit is the best-selling cargo van in the world and it is encouraging the growth of both the work and recreational side of the cargo vehicles.

Just this week, Ford showcased 35 different examples of how the vans can be customized for both work or as recreational vehicles. One company called VanDOit specializes in converting the Transit into adventure vans or building them into mobile offices.

Ford Seeing Growth in both Business and Recreational Van Use

Ford claims that it has been building America’s favorite van for 39 years. The van market has seen a resurgence in the last few years as the economy has improved and more people, like painters and construction workers are using them as mobile offices. According to the automaker, “Full-size van sales are up 23 percent since Ford introduced Transit in June 2014, with Transit driving 78 percent of that growth. Ford Transit is the best-selling cargo van in the world.”

As the economy gets even stronger, more and more people are also transforming the vans to use for recreation.

Ford is working closely with third parties to drive this growth and to encourage even more opportunities. Ford gathered some of the country’s top custom fabricators and upfitters to showcase their hottest vans for work and play. Vehicles ranging from ambulances and traveling billboards to delivery vehicles and luxurious conversion vans were on display.

Ford builds the Transit in a variety of configurations to help customers and upfitters find exactly the right van, including high, medium and low-roof styles. It also has heavier-duty chassis cab and cutaway versions to fit virtually any scenario. Whether for work or play, the Blue Oval has a van that could probably make your life easier or more fun.

Vans and Trucks Reflect the Strength of the Economy

The increasing popularity of vans is good business, not just for Ford and its dealers, but the community as well.

“Commercial vans have a ripple economic effect,” explained Tim Stoehr, Ford general fleet marketing manager. “Because commercial customers actually use vans as equipment for their business, a Transit or Transit Connect can generate profits at multiple levels – for Ford, its dealers, upfitters and end-user customers.”

Some companies like VanDoit and Nor-Cal Vans have built their own businesses focused on upfitting Ford Transit vans.

Amanda McTavish, the marketing director for Nor-Cal Vans, said her company has been able to expand into new markets and offer more options since Ford Transit debuted. “Our company size has doubled – both in vehicles produced and revenues created.”

Ford also featured businesses that are using the Transit vans. One business is called the Shoe Shine Guys and the Transit is transformed into a mobile shoe shine stand. Owner John Early says “Mobile businesses are on the rise. We need a vehicle with a sharp look, great gas mileage, roomy and workable interior, versatility in pricing, and more than anything, reliability. Ford Transit is the answer to all of that – and more!”

Ford also features a highly configurable smaller van called the Transit Connect. Both vehicles offer a wide range of possible uses, both for work or recreation. You can check out the fuel economy of the different variations that are offered here.