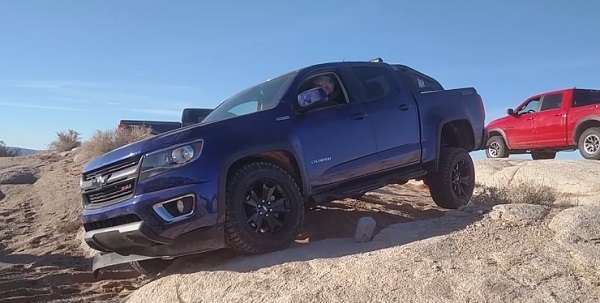 Chevrolet is aggressively improving the Colorado midsize truck and its cousin the GMC Canyon to go toe-to-toe with the Toyota Tacoma. Both of the GM vehicles are adding new features, including a GMC off-road version to compete with the already announced 2017 Tacoma TRD Pro.
Advertisement

The midsize truck market is now booming, but it wasn’t long ago that GM and Ford backed away from the smaller trucks to concentrate on the larger, more profitable vehicles. That void allowed the Toyota Tacoma to surge. Ford has still not re-entered the market, although the Ranger exists in other parts of the world. GM is once again beefing up its medium- sized Colorado and Canyon.

Chevy is promising that the 2017 Colorado will have an all-new V-6 engine and eight-speed transmission, creating a combination that’s unmatched in the midsize segment. Chevy is trying to improve the driving experience and the 8 speed transmission should improve the towing ability. The Colorado is only in its second year but it has sold relatively well at 160,000 units.

The GMC Canyon was recently named the “Best Midsize Pickup Truck of 2016” by Cars.com. While it is also offering the new V-6 engine and eight-speed transmission, the 2017 Canyon has a special All Terrain X model that is the most off-road-capable Canyon for those who plan to see the back country.

Toyota has been continually investing in and improving the Tacoma over the years and Tacoma TRD Pro prides itself in excelling in off-road conditions, whether it is snow, sand or rocks. The company introduced off-road packages for the Tacoma starting back in 1998. It has steadily improved them.

Both GM and Toyota have included lots of bells and whistles, like rear parking assist and blind spot monitors. The GMC Canyon also has a standard “teen driver mode”, in case you are worried about what they are up to.

Chevy and GMC are up against huge competition. Tacoma virtually owns the midsize market having sold nearly 180,000 last year alone, more than the Chevy Colorado sold in the two years since its introduction. The Nissan Frontier draws respectable numbers in the segment as well, having sold more than 60,000 last year.

The saddest thing about it for GM is that they abandoned the mid-size truck market and handed it to the competition. This was the same strategy that GM used with midsize cars decades ago. The automaker has struggled mightily in the last ten years to win back the car segments that they relinquished to the Toyota Camry and the Honda Accord. Again, they made a decision to focus on other profit centers and were forced to come from behind.

Clearly Chevy and GMC are building strong vehicles that are showing up well. You have to wonder how well the truck would be faring had they stayed committed to it, all along? Now see what happens if Ford Ranger enters the race.