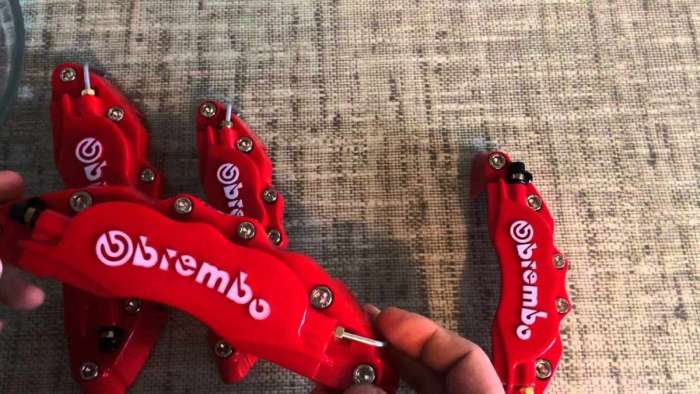 Eight people are being sent to jail in Japan for selling fake Brembo brake covers.The surprising thing according to Brembo is that they don't make brake covers.
Advertisement

Brembo is reaching out to car lovers who may be snowed into buying fake Brembo brake caliper covers. The company wants to stress one key fact. All Brembo plastic brake covers must be fake because Brembo doesn’t make brake covers.

Brembo released a lengthy statement explaining that eight Japanese citizen have been sentenced to prison for selling fake Brembo covers that were produced in China.

Brembo explains that it is referring to “the plastic covers (or on rare occasions aluminum) that are placed over the brake caliper with the intention of improving (?) the overall aesthetics.”

According to Brembo “The Aichi prefectural police in the Chubu region of Japan have arrested eight people for selling 87 plastic covers originating from China but marked with the Brembo logo.”

In its statement, Brembo stresses in large print:
“BREMBO DOES NOT PRODUCE COVERS.” Not only, does Brembo not produce the brake covers, it has never produced the brake covers.

Again, Brembo stresses that all Brembo covers are fakes. According to the company’s statement, “Since Brembo does not make covers, all the covers on the market that carry the Brembo logo are fakes. It doesn't matter if you buy them from a hawker or on Amazon or eBay, or even on an on-line store: Any plastic cover with the Brembo logo is counterfeit.”

Brembo says that when the company realized a few years ago that products were being marketed with its logo, it developed an anti-forgery card for the components in the High Performance and Racing lines. According to Brembo, “What it boils down to is the counterfeiters know how prestigious the Brembo brand is, but instead of copying one of our calipers (a nearly impossible task), they have settled for producing a substitute: the phony cover.”

Brembo admits that the caliper covers are eye-catching, especially the brightly colored ones. However, the company says they are still a bad idea. Brembo also recommends against painting your brake calipers, unless you use the company’s strict industrial procedures because the paint could force the brake to malfunction or be unreliable.

Brembo suggests that if car owners want to make their brakes look bolder, they should instead add a pair of Brembo Xtra discs. The discs make the brakes stand out while also helping the brakes cool down more quickly.